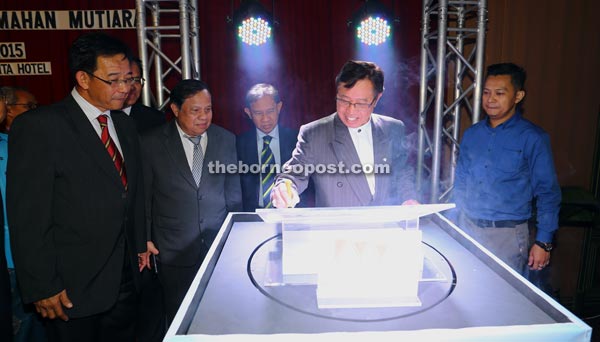 KUCHING: People from the low-income group now have greater chances of fulfilling their dreams to buy houses and live in decent homes with the official launch of Mutiara Housing Loan Scheme yesterday.

The scheme, which was launched by Housing Minister Datuk Amar Abang Johari Tun Openg, is specifically established to cater for the financial need of this particular segment of people to purchase their own houses.

Abang Johari said the scheme, funded by both the state and federal governments with the support from the Finance Ministry and Bank Negara Malaysia, would target those applicants with gross household income of RM5,000 per month who normally could not obtain housing loans from any financial institutions in the past.

He, however said, Mutiara Housing Loan Scheme was offering an alternative and not a substitute to the existing loan schemes in the market and as such banking and financial institutions would certainly still need to continue playing their role in providing end-financing to eligible house buyers under their respective schemes.

Abang Johari said the state government, through his ministry had initiated the housing loan scheme because so many potential buyers were unable to secure loans from local banks in the past due to the rigid and strict conditions.

“Formal financial institutions often fail to provide financial assistance including housing loan to the low income people and a clear testimony to this unfortunate state of affair is the high rejection rate for housing loans involving low income applicants who want to purchase housing units under the Housing Development Corporation (HDC) programme.

“Over the past years, close to 40 per cent of first-time house buyers applying through HDC were not able to secure loans from the local banks. The rigid and strict conditions imposed by banks for the loans further compounded the problem,” he said.

He said this had caused a double whammy situation whereby the government had provided the targeted group with ready housing stock and yet they (houses) were not able to find ready buyers because of the inability of the applicants to secure loans from the financial institutions.

“This predicament has been going on for many years. As far as my ministry and the state government are concerned, this issue can’t go on for too long without concrete solution in sight or else it would lead to an unsustainable housing sector that discriminates against the very target groups it intends to serve, which is the low income group.”

He said it was for this reason that the new housing loan scheme was introduced to address the problem.

“The scheme will target those applicants with gross household income of RM5,000 and below per month. The financing limit shall be up to 95 per cent as we also like to see some form of commitment from the borrowers to pay a minimum upfront to secure the loan.

“The scheme will also allow inter-generational loan among the family members to ensure they can afford the monthly repayment. Single applicants can also apply provided they are 30 years old and above because by that age, we believe they have a stable income or some form of saving to enable them to buy a house,” he said.

Managed by Mutiara Mortgage and Credit Sdn Bhd, a wholly-owned subsidiary of HDC, Abang Johari said at the initial stage the Mutiara Housing Loan Scheme would only be opened to Program Perumahan Rakyat (PPR) Project, a government project undertaken through federal funding.

They include among others, PPR Lambir, Miri which will be completed soon, PPR Sungai Tengah, Matang and PPR Petra Jaya, Kuching.

“The coverage of the scheme will be expanded in future once we have secured additional funding either from the government or from other external sources. Given the anticipated high demand for this loan, Mutiara Mortgage may also explore the possibility of obtaining fund from the money market.

“Therefore, I would like to take this opportunity to urge the local financial institutions to give their support to this timely endeavour,” he said..