Sunday, September 26
You are at:Home»News»Sarawak»PKS urged to produce students of calibre 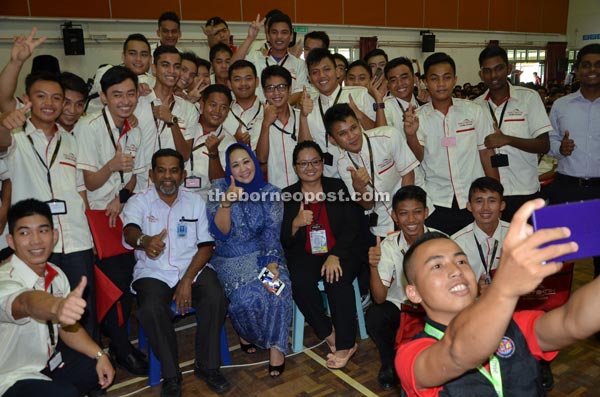 Sharifah (seated centre) and Sahul on her right with the June intake of PKS students at the closing of Familiarisation Week. — Photo by Jeffery Mostapa

“Very often we hear that graduates these days lack exposure on soft skills – the main reason they could not find jobs in the private sector,” he said at the closing of Familiarisation Week for students in the June 2015 intake at the polytechnic’s Dewan Jubli Perak here yesterday.

“I remind the academic management of PKS not to focus on passing academics alone,” he added.

His text of speech was read by Semariang Assemblywoman Sharifah Hasidah Syeed Aman Ghazali representing him at the closing ceremony. Sharifah is also political secretary to the chief minister.

Karim said based on statistics from PKS, he is confident the polytechnic can produce semi-skilled workers for the state by 2030.

“My confidence is based on the essence of the Malaysian Education Development plan for higher education launched by the prime minister on April 7, 2015 with the main focus to strengthen the role of Technical and Vocational Education and Training (TVET) institutions under the Ministry of Education – namely polytechnics, community colleges and vocational colleges nationwide,” he said.

Karim said the state government had intensified the programme to promote TVET among students in secondary schools statewide.

He said Tabung Ekonomi Gagasan Anak Sarawak (Tegas) was given the responsibility of seeing this long-term programme became a reality.

Under ‘Promotion of Technical Education’, assistant minister Datu Len Talif Salleh was given the responsibility of liaising with institutes of higher learning (public and private sector) and agencies providing technical training in Sarawak to promote their products.

Karim pointed out that SCORE is the state government’s vision to make Sarawak the richest state in Malaysia.

PKS director Sahul Hamed Abdul Wahab revealed that a total 1,015 students had registered with PKS to attend courses starting on June 22. Out of that, 258 will do mechanical engineering, 220 civil engineering, 140 electrical engineering,119 Information technology,116 petro-chemical, 98 business studies and 64 accountancy.

A total of 22,944 students are entering 33 polytechnics in the country for this June session.