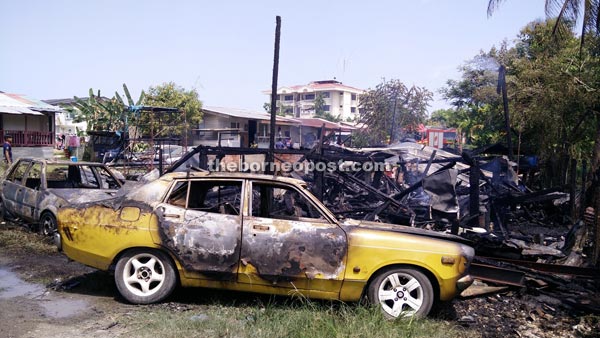 Chin’s Datsun 120Y was one of the two cars damaged by the fire. 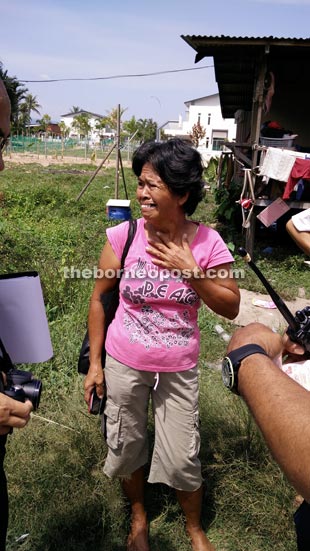 The distraught Mercedes holding back tears while looking at the burnt remnants of the house she called home for five years. 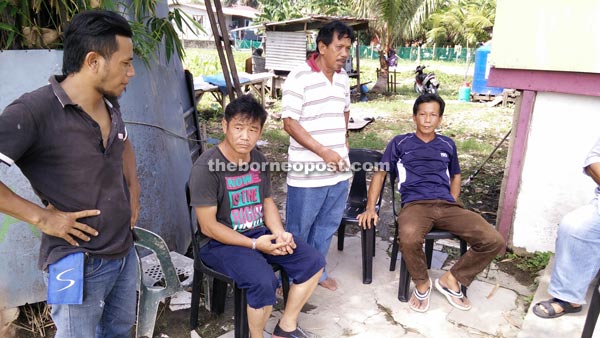 Chin (seated left) peering at the burnt down remnants of the house.

KOTA KINABALU: A father and son and a Filipina lost everything when a fire engulfed their homes in Kepayan here yesterday morning.

Built on private land next to Taman Deluxe, the two adjacent semi-permanent wooden houses were burned to the ground by the fire within minutes.

“I was out doing errands when the fire happened. My son was home at the time. When he saw the fire, he ran out of the house to the neighbor next door,” said single father, Chin Nyuk Wah, 49, who lives with his nine-year-old son in one of the houses.

“Everything is in the house, even the birth certificate …” he said, as he nodded his head in disbelief and mustered a wan smile while looking at the remnants of the house and his Datsun 120Y car, which was also damaged by the fire.

“I don’t know how you can contact me now because my hand phone was in the house and it was destroyed in the fire,” said Chin, who has lived in the house for 12 years.

Filipina, Mercedes Ramaguton Masbanua, 52, was very distraught when she came back after being contacted by one of the neighbors. All she had left was the clothes on her back and a bag filled with her personal belongings, including her hand phone and her passport.

“I was out doing work just now. I have been living in Sabah for 10 years now and had stayed five years in the rented house, she explained struggling, with little success, to push back the tears.

“I have lost everything…everything,” she moaned as a neighbor tried to pacify her.

Both victims echoed each other’s sentiments, expressing that they do not know what or where their fate lies after losing all their possessions in the fire.

According to Mohammad Hannis Moktar, Kota Kinabalu Zone fire assistant superintendent, the Fire and Rescue Department received a call regarding the fire at 10.06 am and a team was immediately despatched to the location at 10.07am.

He said 28 firemen were involved in putting out the fire which was put under control at 10.22 am.

The fire destroyed two privately owned cars and damaged one nearby, he added.

“The team is now investigating into the cause of the fire and, thus far, no casualties have been reported. The estimated losses are also still under investigation,” said Mohammad Hannis.

“I would advise the public not to be negligent as the kitchen gas stove is one of the major causes of fire. Do not leave the kitchen when cooking,” he stressed.