Tuesday, July 5
You are at:Home»News»Sarawak»Sarawak may see end of mega dams 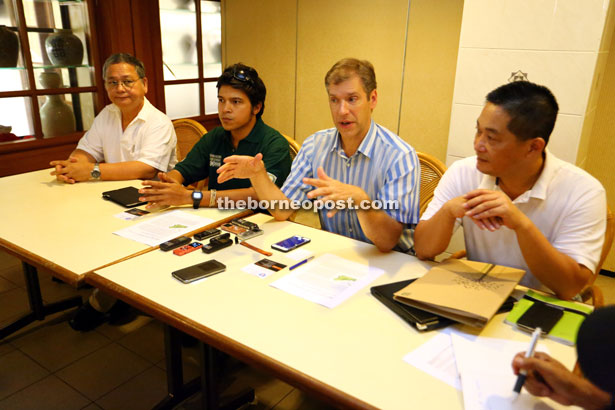 Kammen (second right) addressing members of the media. With him (from left) are Kallang, Gabriel and See. — Photo by Muhammad Rais Sanusi

After the one-hour meeting, which included a presentation by Kammen on the benefits of using renewable energy such as solar, wind, sustainable biomass and micro-hydro in place of mega hydro-dams, the delegation had a feeling the Adenan administration would ‘seriously rethink’ its policy to build more mega dams.

See said the briefing had enabled Adenan to hear the ‘other side of the story’, rather than just depending on what Sarawak Energy Bhd (SEB) had to say.

“We gave him (Adenan) the authority to reconsider since he has heard from SEB with all their energy projections.

“We gave him an alternative, with studies showing him that the state does not need that kind of energy. You have Bakun HEP (hydroelectricity project) that is there for so long, but you’re only using half of its capacity.

“Of course, now with all these alternatives, which come in with graphic projections indicating what the state needs to meet demand for the next few decades, it is now clear we can actually use alternative renewable energy sources to replace all these big dams,” he told a press conference at a hotel here yesterday.

See added that the briefing on Saturday enabled Adenan to have a better picture of the whole situation, adding that the chief minister even asked Dr Kammen and Green Empowerment to submit a proposal and options of renewable energy (sources) that were practical for the state.

“They (Kammen and Green Empowerment) will do it very soon because they have everything (all the information) in the three reports that they have come out with based on studies. They have most of the things there – it’s just a matter of modifying them and giving the proposal to the chief minister.”

In his view as a non-Sarawakian, Kammen said the meeting with Adenan was ‘most interesting’ because a ‘very friendly discussion’ was held on the opportunities, benefits and costs of clean energy.

“In fact, we have been asked by the government to prepare a proposal – maybe to start off with some pilot villages or to visit some of the projects that are already in Sarawak or Sabah.

“I worked in Eastern Africa where last year, more people were connected to the grid with mini grids and off-grid products than by grid extensions,” said the professor, who is Class of 1935 ‘Distinguished Professor of Energy’ at the University of California in Berkeley.

Meanwhile, Kallang claimed Adenan told the delegation that the newspapers had misquoted him for stating he had given the ‘go-ahead’ with regard to the construction of Baram dam during a gathering of community leaders in Miri recently.

“He (Adenan) was consulting the community leaders, but lots of people there were not even from Baram. The majority of members of the Federation of Orang Ulu Malaysia (Forum) – the organiser of the event – are from Belaga, Limbang and Bario, with very few from Baram.

“They had nothing to lose, (which was why) they stood up and gave their support (for Baram Dam).”

Kallang also took the opportunity to submit to Adenan the anti-Baram Dam petition signed by more than 8,000 people who were affected by the project, and Kallang claimed Adenan responded ‘very positively’.

Kallang said Adenan was very receptive to the ideas raised during the Saturday presentation because he (Adenan) sympathised with the rural people.