Thursday, August 18
You are at:Home»News»Sabah»‘Illegal wire connections are ‘death traps’ for firemen’ 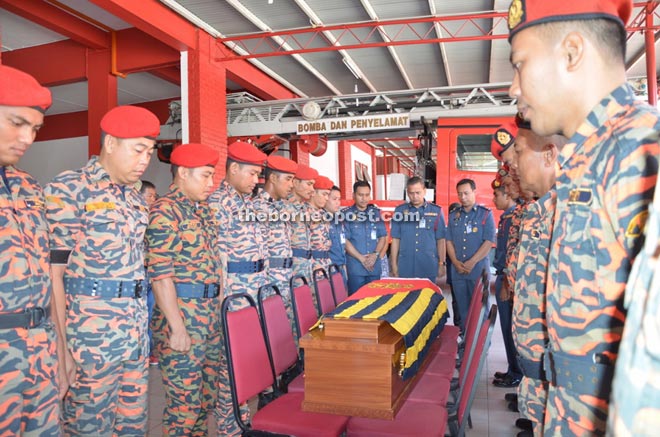 Nordin and personnel from the Sandakan fire station paying their last respects to Apolos.

SANDAKAN: Fire and rescue personnel are exposed to ‘death traps’ even though they are following the highest precaution and Standard Operating Procedures when on duty.

Sabah Fire and Rescue Department director Nordin Pauzi said this after one of his men was electrocuted by an illegal wire connection here on Monday.

He said the electrical wire was about 300 meters long and its location was hard to identify as it was hidden and resembled the colour of plant debris and branches.

“Bush fire is different to fire incidents in buildings or structures whereby the building’s wiring could be identified and switched off.

“In this incident, we found that the wire was more like a ‘death trap’ as it was hard to identify. This has become a ‘death trap’ for our personnel and this was what took our fireman’s life,” he said during a press conference at the Duchess of Kent Hospital here while awaiting for the victim’s body yesterday morning.

Apolos Jeremos, 25, was electrocuted when putting out a bush fire in an operation at Taman Kenari Mile 7 here around 4pm last Monday.

According to Nordin, the electrical wire was illegally set up by irresponsible parties to supply electricity to well-hidden squatter houses near the area.

He said the bush area that caught fire was a piece of abandoned land about three hectares wide. Despite the incident, the fire and rescue team still prioritized the safety of the residents in the area and continued to put out the bush fire on the same day until around midnight.

“I urge the relevant parties to take necessary action so that Apolos’s death would be defended and such incident would not happen again in the future, especially to the firefighters,” he stressed.

“We are deeply saddened to have lost Apolos as he was a young officer who was dedicated and committed in performing his tasks. This is a great loss to the fire department in Sabah as the late Apolos was also a member of the Special Tactical Operation Rescue Malaysia (STORM). Apolos was also involved in the search and rescue operation in the recent earthquake incident in Ranau,” he said.

Nordin said the department would make every effort to give all forms of welfare assistance, including the ex-gratia from the fire and rescue group fund to the victim’s family.

“We have ensured that early assistance be given to Apolos’s family for the cost of burial. I am deeply sorry for the loss to his family and I hope that his wife, who is five-month pregnant, would be strong and accept this fate,” he stated.