Friday, September 30
You are at:Home»News»Sarawak»Bengoh Dam ready for impoundment 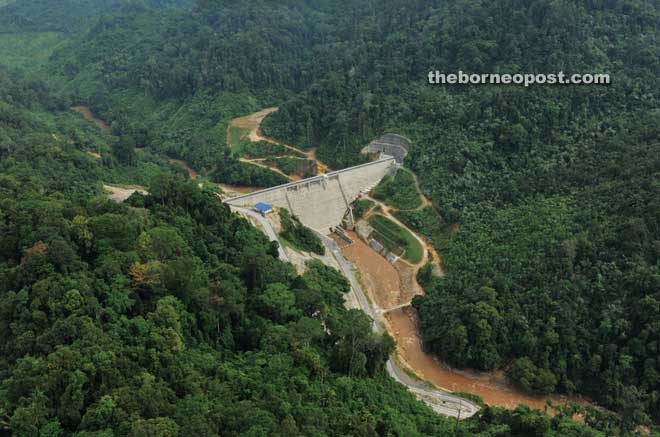 An aerial view of Bengoh Dam.

KUCHING: The RM310 million Bengoh reservoir dam has been ready for impoundment since March this year as all the families from the five affected villages – Kpg Rejoi, Kpg Pain, Kpg Sait, Kpg Semban and Kpg Bojong – have been resettled at the Bengoh Resettlement Scheme (BRS), says Bengoh assemblyman Datuk Dr Jerip Susil.

Dr Jerip told thesundaypost here yesterday that it was important to impound the Bengoh dam as its reservoir would be the fresh water supply source for Kuching and its suburbs.

“I was told that the water at the Batu Kitang weir is now at critical level due to the prolonged dry spell except for today, as there is rain. But if we have the Bengoh dam, then we will not be facing any problem with our water supply,” he said.

He said there were plans to impound the dam in November last year and in January this year, but both deadlines passed without it being done.

When asked what could have delayed the impoundment of the dam, Dr Jerip, who is also the Assistant Minister of Public Health, believed the delay could be because the biomass in the reservoir had yet to be completely cleared.

The construction of the Bengoh dam is a long term plan by the state government to ensure adequate water supply for Kuching and Kota Samarahan areas.

It is part of a 10-year master plan initiated by the government to cater to the increasing needs for water supply in big towns and cities.

There were two types of plans to increase treated water supplies in the state: one is for Kuching and its suburbs and the second one for smaller towns, where the demands is not quite urgent.

The Bengoh Dam is a Roller Compacted Concrete (RCC) gravity dam with a height of 63 metres.

It is the second of its kind in the country, after Kinta Dam in Perak, to use this technology.

Once operational, the dam can supply 2,047ML/d (million litres per day) and can meet the demand of 1.7 million people of greater Kuching up to the year 2030.