Thursday, October 28
You are at:Home»News»Sarawak»Keeping tarantulas as pets gaining popularity 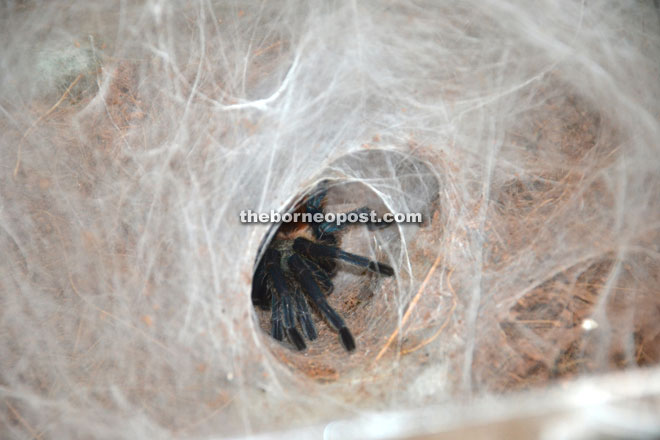 Green Bottle Blue, the most poisonous spider, makes cobweb to protect itself from threats.

MIRI: With keeping cats and dogs as pets becoming too mainstream, youngsters and children now turn to rearing exotic pets like tarantulas which is gaining popularity.

“They are often thought to be scary, but the truth is they actually are a gentle creature. They love their own space, keep to their own privacy and more importantly, their maintenance is low,” Royce Wee told The Borneo Post when met at his home recently.

At a young age of 24, Wee already owns more than 100 kinds of tarantula species, becoming one of the biggest local spider owners and sellers here.

“I was not a big tarantula fan to begin with, but circa 2012 when I chanced upon a visit to an exotic animal exhibition held in Permymall, I was fascinated by how they (owners) could handle the species, I fell in love with them,” he said. 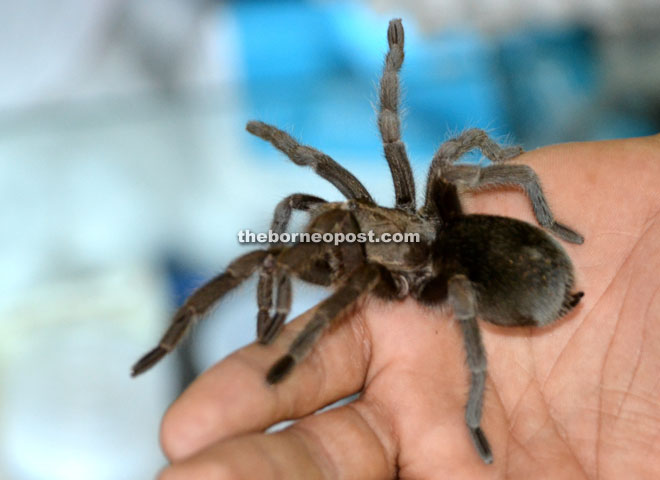 Providing the tarantulas a safe and comfortable home is vital, he stressed.

“After several trials and errors, which I experienced when using different kinds of material to make a home for them, including through researches I found from the Internet, a glass box with fitted cover complete with sterilised coco peat makes the best home, as it not only secures the creature from escaping it also looks nice from outside. After all, it is not nice to give non-spider lovers a scare,” he said cheekily.

Meanwhile, for smaller-sized spiders, Wee said they are kept separately in plastic bottles. He claimed that he had spent more than RM10,000 on purchasing these tarantulas from foreign countries as well as on maintenance.

“Unlike other pets like cats and dogs, tarantulas are selective with food. I specially bought Dubia roaches (Blaptica dubia) imported from USA. As a pair of a male and female costs about RM4, I’ve decided to breed them to cope with the huge demand,” he said.

Wee confessed that initially his family was against his tarantula obsession.

“Traditionally, the older generation has this perception against keeping tarantula at home or as pet, claiming it is a bad omen. Eventually, the growing popularity of keeping spider as pet has broken that taboo.

“To be honest, tarantulas might look scary, but they too are facing threat surrounding them. Ants are their biggest enemy. The latter move and act in groups with tens to hundreds of them at one time. As a spider lives alone, it defends itself using only its mouth and is easily defeated.”

Wee quipped that in recent years there has been a high demand for tarantulas among local youngsters.

“People are growing fond of them, this is not only good for my business but I am impressed with how people learn to appreciate these gentle creatures. Each of the spiders can fetch RM30 up to RM3,000 according to popularity.”

Wee admitted that a tarantula’s bite is venomous but most of them are not deadly.

“I have personally been bitten a few times, which I think is due to the way I handle them. Being too rough would trigger their defence system. Apart from biting, tarantulas tend to kick their legs, which lead to hair falling off their feet. The hair can cause allergy on the skin if not washed off quickly,” he pointed out.

“Two months later, with 600 eggs that were all wrapped nicely in a cobweb looking like a huge white egg, I took them out before they burst and nurse the baby spiders until they matured. It is an interesting observation and great learning opportunity,” he said.

Another interesting thing, he said, is when the tarantula changes its skin, which happens once every few months.

Due to his popular tarantula profile, Wee is often invited to various exhibitions. From time to time, Wee would search online for latest information relating to new found tarantula species.

“It is fascinating to see such a passion by researchers in foreign countries,” he said.