Wednesday, October 5
You are at:Home»Business»TPP talks head to Hawaii for final stage 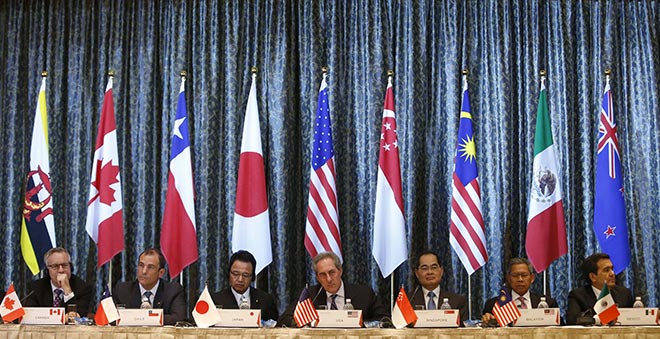 WASHINGTON: Negotiators from the US, Japan and 10 other Pacific Rim countries could put the finishing touches on the most ambitious trade and investment deal in decades when they meet this week in Hawaii.

But with the details of the Trans-Pacific Partnership, or TPP, hidden in intense secrecy, the talks have fueled suspicion that whatever they achieve will benefit powerful corporations but not economies and people generally.

And with China deliberately excluded, it remains to be seen if a 12-country deal will be enough to coax Beijing toward further opening its economy and embracing more international business standards.

By most accounts, TPP negotiators have narrowed their focus to a number of key issues, and are under pressure from Washington to finalise a deal in the coming months.

That would advance the US agenda for a new international framework for trade in services, investment and protection of intellectual property.

Such a framework could also become a model for the even larger Transatlantic Trade and Investment Partnership (TTIP) Washington is negotiating with the European Union.

US President Barack Obama has staked much credibility on reaching a deal.

The talks between trade ministers beginning tomorrow (July 28) on the Hawaiian island of Maui come only after he won a bruising battle in Congress for the power to reach a final agreement without interference from the legislators.

The deal will help a whole range of US industries, from farms to shoemakers to movie studios, he has argued.

“If we don’t write the rules for trade around the world – guess what – China will. And they’ll write those rules in a way that gives Chinese workers and Chinese businesses the upper hand,” Obama said in May.

There are also significant stakes for the other countries involved: Australia, Brunei, Canada, Chile, Japan, Malaysia, Mexico, New Zealand, Peru, Singapore and Vietnam. Yet the secrecy of the TPP talks has also stirred suspicions.

Negotiating documents obtained by WikiLeaks depict a wishlist of US businesses that critics say could raise the cost of healthcare drugs, allow investors to sue countries in extra-national tribunals, sharply increase protections for intellectual property while criminalising small violators, as well as lower protections of a person’s personal information while increasing data-focused companies’ rights to it.

The suspicions are strong enough that WikiLeaks is raising  100,000 to offer to anyone that can deliver the muckraking website the entire TPP text.

“Very little in this agreement is about free trade… In recent years any free trade agreement has really been about intellectual property protections,” said Susan Sell, a political science professor at George Washington University.

TPP would bring together around 40 per cent of the global economy, attempting to update and harmonise existing bilateral trade agreements between most of the members.

According to a study by the Peterson Institute for International Economics in Washington, it could add US$295 billion in annual global income after the 10-year implementation period.

A relatively small part of that would be from traditional goods trade, where global tariffs are already low, noted economist Peter Petri, one of the study’s authors.

More important, Petri says, is setting global rules that ensure that companies can invest in economies and feel secure that their investments are going to be free of excessive regulation or interference.

“This is the most important trade negotiation we’ve had in more than 20 years,” he told AFP.

“It will have very significant indirect benefits in how it will begin to reshape trade rules across the world.” TPP grew out of the failure of the World Trade Organisation to address advanced economy interests like investment standards and dispute resolution, protections for copyrights and patents, and issues arising from ecommerce and data-based industry.

TPP would be a platform to build upon.

“The ultimate goal of the process has to be a region-wide system. It doesn’t help either the US or China to divide up the Asia-Pacific into two zones,” Petri said.

China has advanced its own idea for an Asia-wide trade deal – the Regional Comprehensive Economic Partnership, or RCEP – that would likely offer much less than TPP for American companies.

Even so, both Washington and Beijing see the TPP and RCEP as building blocks for a broader Pacific trade deal, dubbed the Free Trade Area of the Asia-Pacific.

“We believe they can work in parallel as two main routes leading to the building of the FTAAP,” foreign ministry spokesman Hong Lei said in April, referring to the broader trade deal.

But critics say that does not make TPP any great deal.

Dean Baker of the Center for Economic and Policy Research in Washington said TPP’s prospective economic gains are small and offset by higher costs to consumers from increased protections for intellectual property.

“People will be paying higher prices for drugs, for copyrighted material.

That’s the same as a tax increase,” with the beneficiaries being US corporations which are insiders to the negotiations.

While nothing is clear about how close negotiators are to a deal, the TPP chapters revealed via WikiLeaks showed some significant differences between the 12 countries.

But pressure is there to reach a final deal within months.

With the US facing elections in November 2016, and voters suspicious of trade treaties, any delay could jeopardise its ratification in Congress. — AFP