Monday, May 23
You are at:Home»News»Sarawak»CM: Bario’s elevation proof of govt’s focus on rural devt 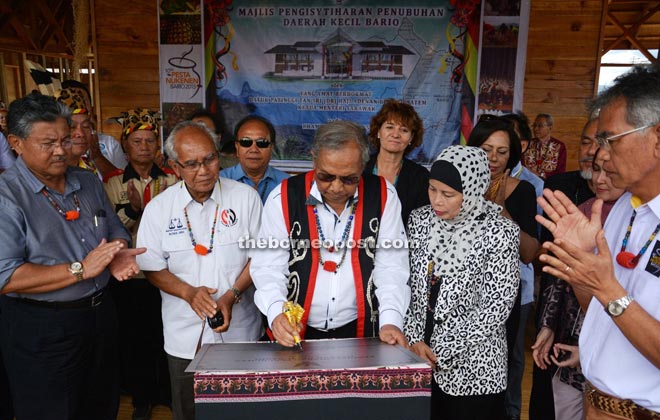 Adenan, flanked by Jamilah and Jabu, signing the plaque to officially recognise Bario as a sub-district after launching the annual Nukunen Festival. — Penerangan Photo.

The recognition was announced during the launch of the Nukunen Festival in Bario on Thursday.

The declaration represented one of many successful implementations by the state government that focus on rural development, as well as the narrowing of the economic gap between urban and rural areas.

“If you all support me and Barisan Nasional, I’m sure the federal government would listen and attend to our requests for state development, because we are united and strong. If we’re not, nobody would listen to whatever I ask. In saying this, the mandate from Bario is needed,” Adenan said during the event, where he announced a clean water supply project for the Bario folk and his nod for the Bario Sub-District Community Hall.

“For the request on extending the runway on Bario Airport so it could accommodate larger aircraft (larger than Twin Otter), I will discuss with Malaysia Airports Holding Bhd.”

Adenan said the state government would also discuss with the Public Works Department and Armed Forces on building a road from Miri to Bario.

Bario is a small town on the Kelabit Highlands – about 3,500 feet above sea level. It houses 12 villages and borders with Kalimantan, Indonesia.

The place’s name means ‘air’ in the Kelabit language, given its windy atmosphere.

Bario Sub-District, on the other hand, spans 4,228 sq km and consists of 47 villages, with a population of 7,513 comprising Kelabits, Penans, Sabans and Kenyahs. Bario was previously part of the Baram District, which was renamed Marudi.

The Nukenen Festival has been held annually since 2005, attracting many visitors including those from overseas to visit Bario.