Monday, January 30
You are at:Home»News»Sarawak»Adenan wants SEB to light up the rural areas
For the freshest news, join The Borneo Post's Telegram Channel and The Borneo Post on Newswav. 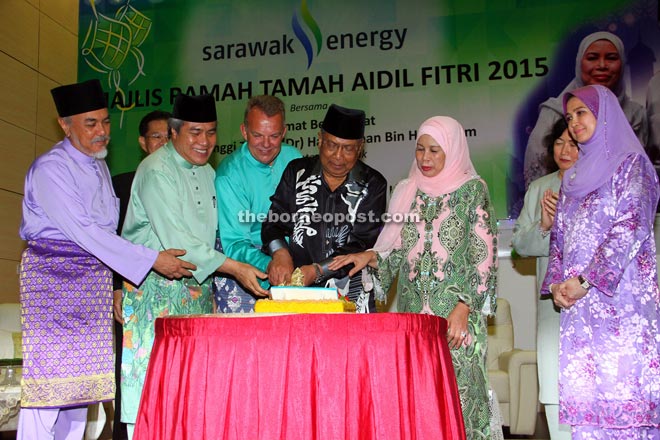 Adenan (fourth from left) cutting a ‘pulut kuning’ with (from left) Asfia, Awang Tengah, Sjotveit and Jamilah. — Photo by Chimon Upon

He said although the government had introduced schemes such as the Rural Electrification Scheme (RES), they were still insufficient in penetrating the rural areas.

There are cases, he pointed out, where settlements do not have electricity supply even though they were located near hydro-electric dams.

“I know that improving and upgrading this (grid) system will be costly, but if we want to cover the whole of Sarawak, we must look after those who are marginalised.

“In the upcoming budget, I want more allocations from the state and federal governments for this area,” he said at SEB’s Hari Raya gathering held at Menara Sarawak Energy here yesterday.

On a related matter, Adenan complimented SEB for its ability to provide cheap electricity to consumers in the state.

“That is the reason why I complimented SEB for being able to provide cheap electricity tariffs to our people.”

SEB chief executive officer Datuk Torstein Dale Sjotveit, in his speech, said SEB’s Research and Development Department was working very closely with the Ministry of Rural and Regional Development and Ministry of Public Utilities to bring electricity supply to every rural household.

Based on the progress of the RES, he said electricity coverage across the state now stood at 91 per cent, and SEB was working hard to reach 100 per cent with the support of the government.

“We have been able to fulfil the chief minister’s commitment to reduce domestic, industrial and commercial tariffs. Sarawakians now enjoy the lowest rates in Malaysia, and we are among the lowest in the region.”