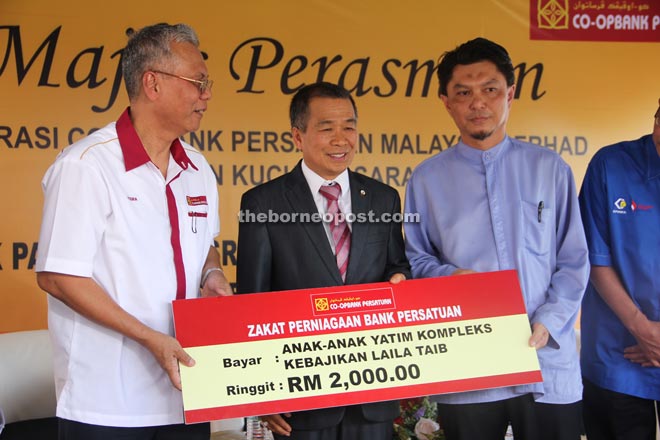 Yusra (left) presents the mock cheque of RM2,000 to a representative of Laila Taib Orphanage Kuching, as Naroden (centre) looks on.

KUCHING: Koperasi Co-opbank Persatuan Malaysia Bhd has reached Sarawak’s shores with the opening of its branch here, slated for providing another financing option for the local business community to start up new ventures or expand existing ones.

He added that the state highly welcomed the expansion of the cooperative bank here, in hope that this would further help local entrepreneurs obtain capital through various facilities on offer.

“This clearly shows that the financing of projects or the raising of capitals to start or expand businesses is not a problem for our entrepreneurs in Sarawak. We have lots of options to go to. Whether your businesses are big or small, (running) as an individual or group, the government has many institutions that offer financing facilities.

“And from today, the Co-opbank Persatuan will be one of those available here,” he said at the soft opening of the cooperative bank’s first branch in Sabah and Sarawak yesterday.

Adenan also noted that application for financial loans under Co-opbank Persatuan could be made online, apart from through the district offices statewide – making it the first bank in the state that offers services deemed truly convenient to the business community, particularly those from the rural areas.

In this respect, he called on local entrepreneurs to make good use of such facilities and be transparent in developing their businesses.

“The government always sees entrepreneurs (and business community) as the driving force of the nation’s economic growth. The government only acts as a coordinator and policymaker, providing infrastructure and amenities to spur this growth.

“Realising this fact, the government always gives strong focus to ensure that the environment here would remain conducive to the smooth and encouraging running of all business activities. As the chief minister, I will ensure this,” Adenan said.

In his own remarks, Naroden believed that the financial services provided by Co-opbank Persatuan – easily available across the state – would greatly help rural communities, especially those in the agriculture sector.

“Such financial strength would enable entrepreneurs to move (market) their products easily from rural to urban areas.”

At the opening, Co-opbank Persatuan also presented part of its business ‘zakat’ (tithe) worth RM2,000 to the Laila Taib Orphanage Kuching.

Previous ArticleBigger subsidy for treatment of dialysis patients?
Next Article ‘Review on Malaysian Agreement 1963 a must by federal govt’