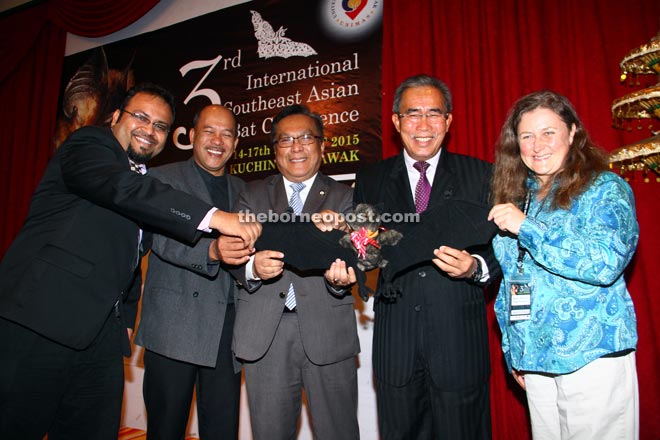 Len Talif (second right) declares open the conference together with Kingston (right), Kadim and others.

“We are very strict in controlling this…to avoid the transfer of the viruses from animals to humans,” said Assistant Minister of Environment Datu Len Talif Salleh after the launching of International Southeast Asian Bat Conference here yesterday.

He said animals had higher tolerance to the viruses than humans. Humans could get sick and might die if they ate the animals.

“Do not ever eat bats. Fortunately, bat is not a popular ‘delicacy’ among the local community. Bats are protected species. In Sarawak, there are 27 species of bats and maybe more. We lack understanding of bats,” he said.

There are 368 species of bats in Southeast Asia and more are found in Indonesia. In Sarawak, most of them live in Mulu Cave, Niah Cave and Wind Cave in Bau.

Len Talif said the government wanted to create a leisure park of about 100 million hectare or more for the preservation of flora and fauna but the process was long as the local community had to be consulted.

Meanwhile, Len Talif who represented Chief Minister Datuk Patinggi Tan Sri Adenan Satem and read his text of speech at the function said: “The sustainability of the natural environment depends very much on the presence of the bat population.

“These nocturnal creatures play very important roles in the ecosystem as pollinators and also as biological control. Our iconic king of fruits, durian, depends on bats as one of the pollinators.”

Adenan added that in the agriculture industry, bats provided free pest control services by consuming insects, thus reducing the use of chemical pesticides, and therefore making our agricultural produce healthier.

“As such, I cannot over-emphasize the importance of conserving and learning more about this unique fauna called bat.

“The state government is committed in supporting and encouraging researchers who are focussed on the importance of bats to the environment which I believe can generate data useful for future references,” he said.

He encouraged local universities to host more conferences, workshops and seminars on similar theme because they were good medium to nurture our knowledge and drive the importance of conservation among the younger generation.