Wednesday, May 18
You are at:Home»News»Sarawak»SS office debunks RM1,000 handout tomorrow

KUCHING: The State Secretary’s office has denied an announcement on social media which stated that Yayasan Warisan Anak Sarawak was handing out RM1,000 aid to those with household income of RM3,000 and below.

The fraudulent announcement with the heading ‘Berita Baik Buat Rakyat Sarawak’ (Good news for Sarawakians) went viral today, stating that those with an address in Sarawak can collect the aid on August 16 at Civic Centre at 10am.

The announcement also called potential applicants to bring along their MyKad, salary slip, electricity bill as proof of residence.

The statement also urged the public to spread word that local elected representatives could be contacted further information on the aid as they were alleged to be the coordinators for the state government.

The statement also cited a website – www.sarawaku.gov – for more information. A quick check of the web page address has yielded a ‘Web Page Is Not Available’ message. 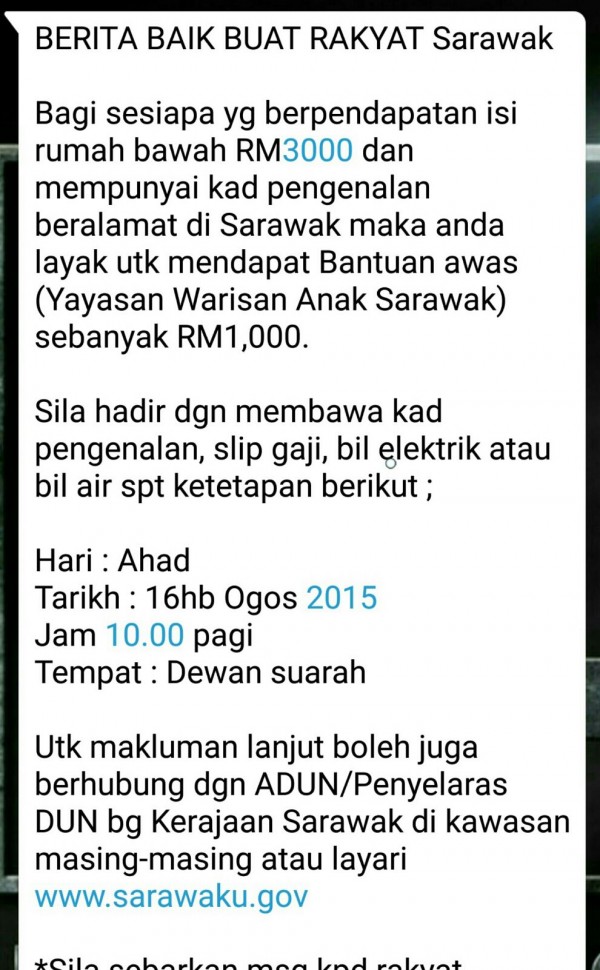 The fraudulent statement on social media claiming that those with RM3,000 would be able to pick up financial aid at their local civic centres tomorrow.