Saturday, December 3
You are at:Home»News»Sabah»All out to save rhinos 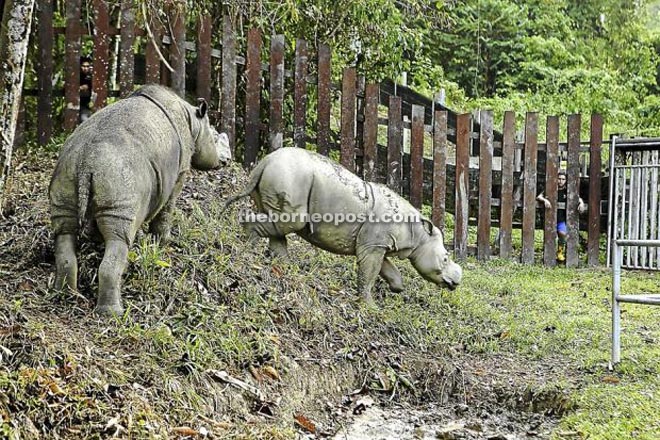 Tam and Puntung at the Borneo Rhino Sanctuary in Tabin Wildlife Reserve, Lahad Datu are among the last surviving Sumatran Rhinos in the country.

KOTA KINABALU: The Sabah government has expressed strong willingness to do anything it can to save the Sumatran rhinoceros from extinction in the country, particularly in Sabah.

Tourism, Culture and Environment Minister Datuk Masidi Manjun said the State government had done a lot to secure a future for the Sumatran rhinoceros in Sabah but there were things beyond their control.

The efforts undertaken have included setting traps in the wild with the hope of capturing more rhinoceros.

However, since the capture of Iman, the female rhinoceros in Danum Valley last year, there have been no new sightings in the wild, said Masidi.

Aside from Iman, there were two other Sumatran rhinoceros now kept at an enclosed facility in Tabin, Lahad Datu. They comprise of Kretam, the sole male in the facility and Puntung. Both females have fertility issues.

Masidi said that other efforts have included forging international cooperation, in particular with Indonesia, to carry out captive breeding.

However, he said that a memorandum of understanding between Malaysia and Indonesia on the matter did not materialise, unfortunately.

Masidi stressed the importance of having government-to-government cooperation in the effort to save the Sumatran rhinoceros because otherwise, the future would be bleak for the species.

Plans to send Kretam to the Cincinnati zoo for breeding was also stopped when Suci, the female Sumatran rhinoceros at the zoo, died.

In addition, the expertise of scientists from the Leipniz Institute for Zoo and Wildife Research (IZW) was also sought to help in breeding efforts.

“We have done everything humanly possible but we need international cooperation,” he stressed.

Masidi regretted the lack of urgency to save the Sumatran rhinoceros from extinction and more should have been done in the past.

He also commended those involved in the effort to preserve the Sumatran rhinoceros.

Meanwhile, Borneo Rhino Alliance (BORA) executive director Datuk Dr Junaidi Payne when contacted in Tabin, said that he was 99.9 per cent certain that there were no more Sumatran rhinoceros in the wild in Malaysia (Sabah).

He added that now, it was up to Indonesia to ensure they did not go extinct.

Dr Junaidi also felt that more could have been done to avoid the circumstances plaguing the species today in Sabah.

“In 1984, Sabah was ready to be part of an international IUCN brokered agreement to form a single global captive breeding programme for the Sumatran rhinoceros. But in 1985, the Sabah government rejected that idea in favour of a wholly Sabah programme to save the Sumatran rhinoceros with no collaboration with any other party. In my opinion that was a mistake. If a truly global programme had been initiated in 1985 then the outcome we see today might be different,” he said.