Monday, February 6
You are at:Home»News»Sarawak»Kuching gets colourful murals under street art project
For the freshest news, join The Borneo Post's Telegram Channel and The Borneo Post on Newswav. 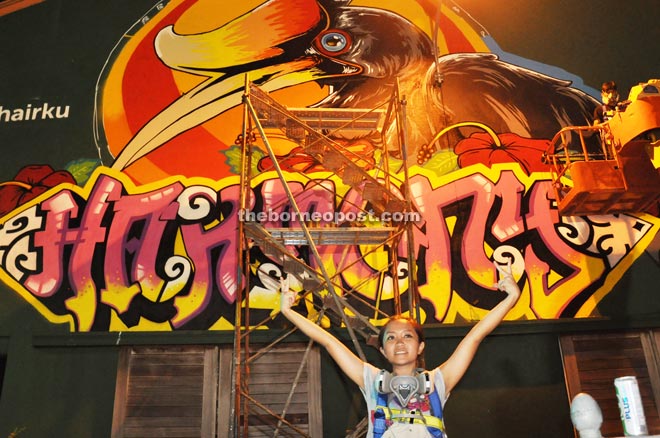 The street art project this year is called ‘Tanah Airku 3.0’ and is fully commissioned by Petronas. It was held in Johor, Sarawak and Sabah as the next destination.

“To represent the theme of ‘Tanah Airku’, we are fusing all the designs which can best represent our state and nation,” said 9Lives artist Miyo aka Tha’ Black Cat when met by The Borneo Post on Sunday night.

Currently working on one of the murals together with 9Lives artist named 25th, the idea to come up with ‘Harmony’ that portrays a set of ‘Bunga Raya’ as the national flower and the hornbill as Sarawak’s icon were very apt.

“This also depicts our natural environment where flora and fauna can flourish in harmony,” said Miyo.

She explained that 9Lives is one of the few art movements here who took their name from the nine lives of cats.

She also said the other mural under the project is named ‘Menua Kitai’, which represents the future of Sarawakians, as it depicts the faces of children from the state’s major races.

The other mural at Carpenter Street represents one of the state’s totally endangered wildlife and creates awareness on the almost extinct species.

Past projects by 9Lives were at the city’s tiger garden and other outlets such as gyms and bars.

The other four artists who worked on the projects she mentioned were Amir and Dina, Sonia and Amy Amin.