Friday, September 30
You are at:Home»News»Sarawak»Developer ordered to pay for defects, late delivery of house 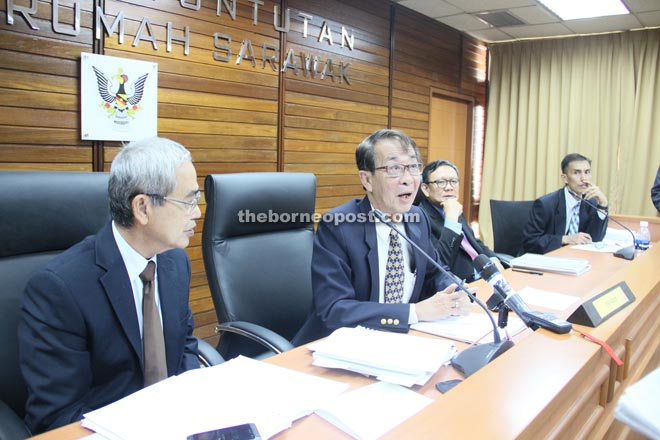 Lim addressing the press conference. With him are Morni (left) and Mike.

KUCHING: The Sarawak Housing Claims Tribunal has directed a developer to pay RM12,000 for all defects found on the property of claimant Lee Kuet Long at Muara Tuang within 45 days from yesterday.

In addition, the developer was also ordered to pay RM6,400 for the late delivery of the property.

The claim hearing yesterday, held at the Old State Legislative Assembly Building, was presided over by Peter Lim Thiam Seng, who was assisted by panel members Morni Wahie and Mike Boon Chee Khian.

According to the brief facts of the case, Lee was not satisfied with the sloppy workmanship on the single-storey semi-detached house bought at a price of RM256,300.

During the hearing, Lee informed the tribunal that the major defects include uneven and cracked car porch, ponding of perimeter drain, defective gate and window frame.

Despite numerous complaints made even after rectifications had been attempted, he said the developer still failed to make satisfactory restoration to the defects.

The owner had moved into the property since May of this year.

Meanwhile, Lim pointed out that the tribunal came up with the decision after hearing and weighing the evidences and statements given by both parties.

“The award of damages for defects is based mainly on the size of problem on the car porch at 81 square metres,” he said.

“As for the late delivery of up to 16 months, the provision of sales fine is RM400 per month for single-storey semi-detached house,” he added.

Meanwhile, the Housing Claims Tribunal had solved 12 cases to date with four cases in Kuching and three in Sibu while five cases had been withdrawn.

The six cases that had been heard, mostly related to housing defects, late delivery, and houses built not according to specifications, registered a total claim of RM46,040.