Monday, May 23
You are at:Home»News»Sarawak»Melissa Francis overall winner of ‘Anugerah Carta Sapa Juara’ 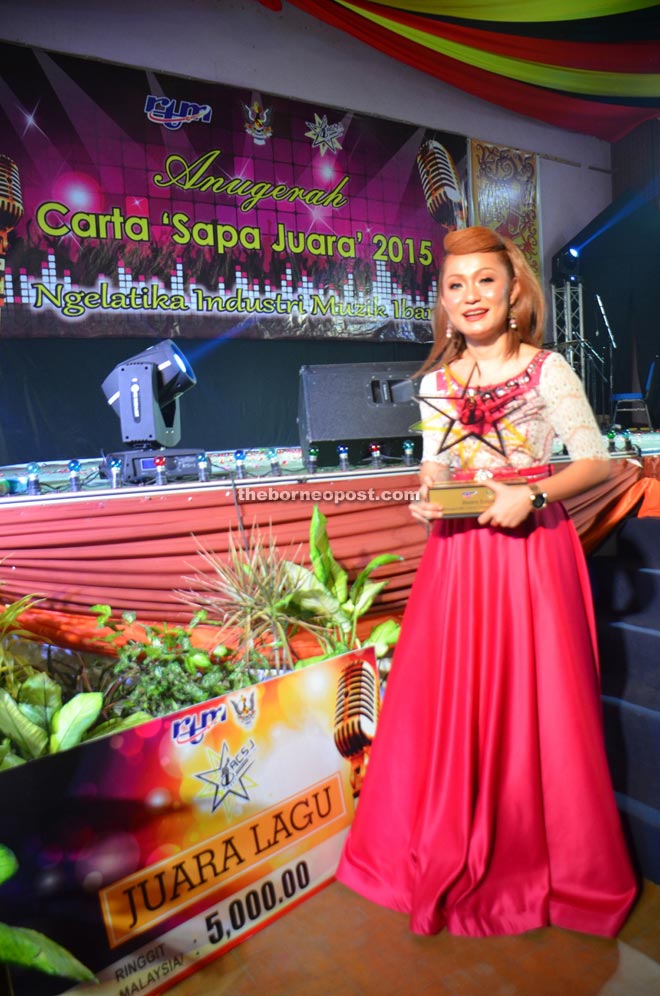 Melissa with her winning trophy. 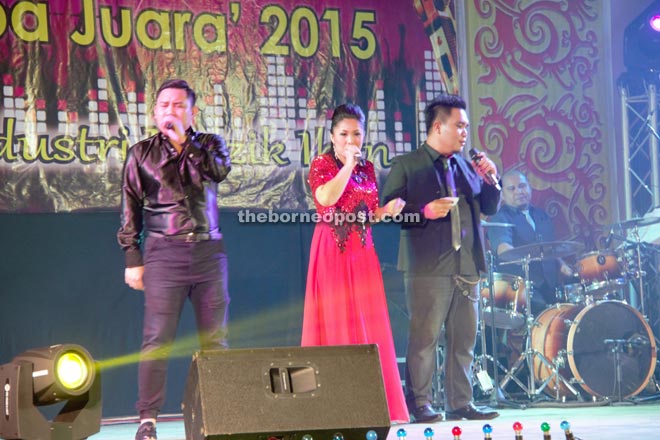 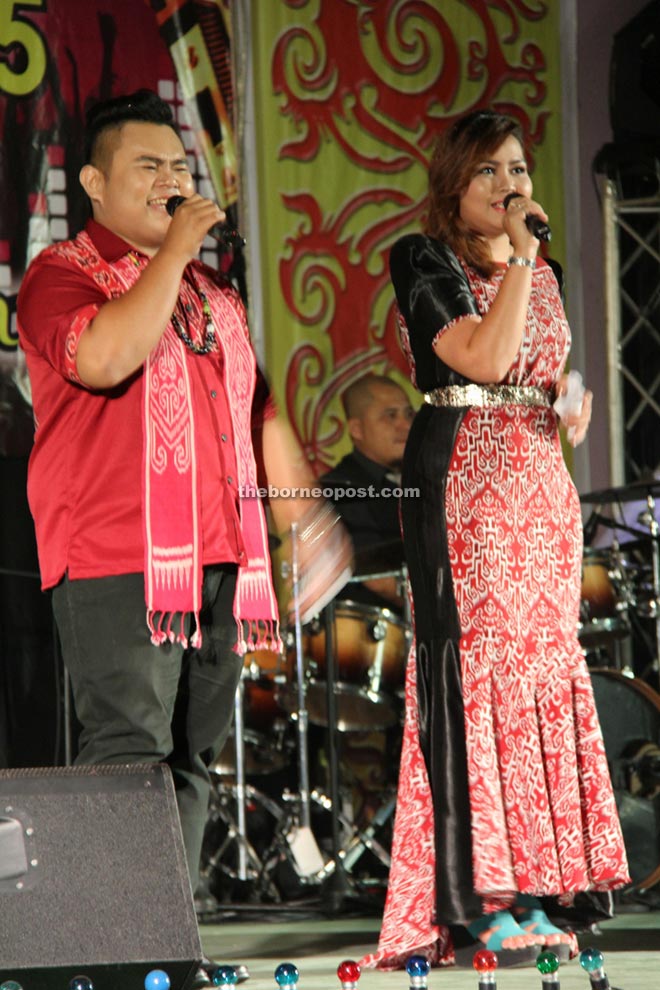 DJ Rajesh and DJ Stephanie manage to enliven the show with their smooth hosting. 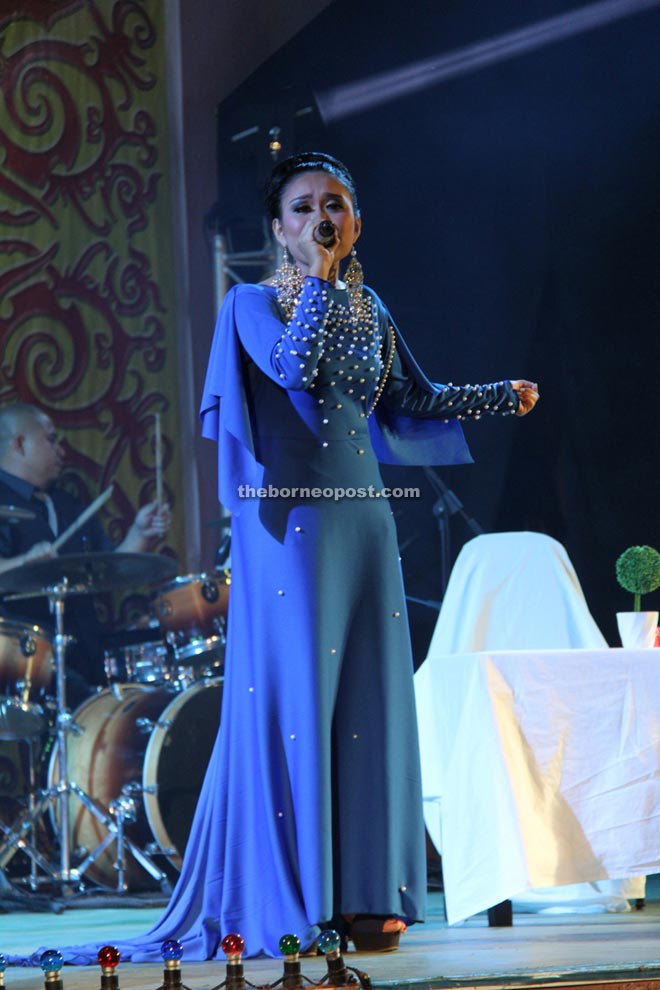 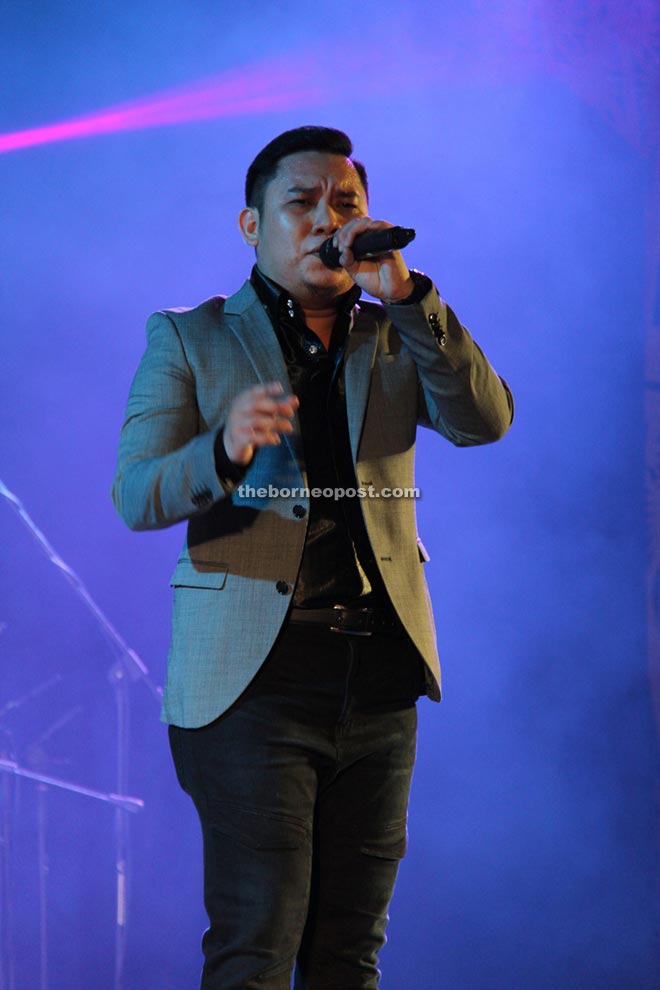 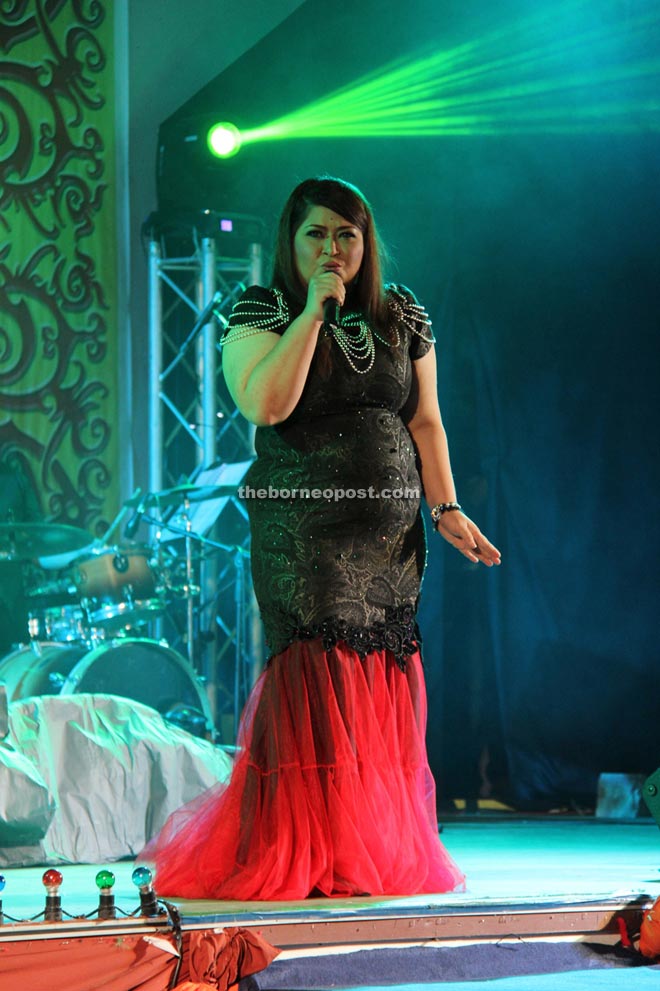 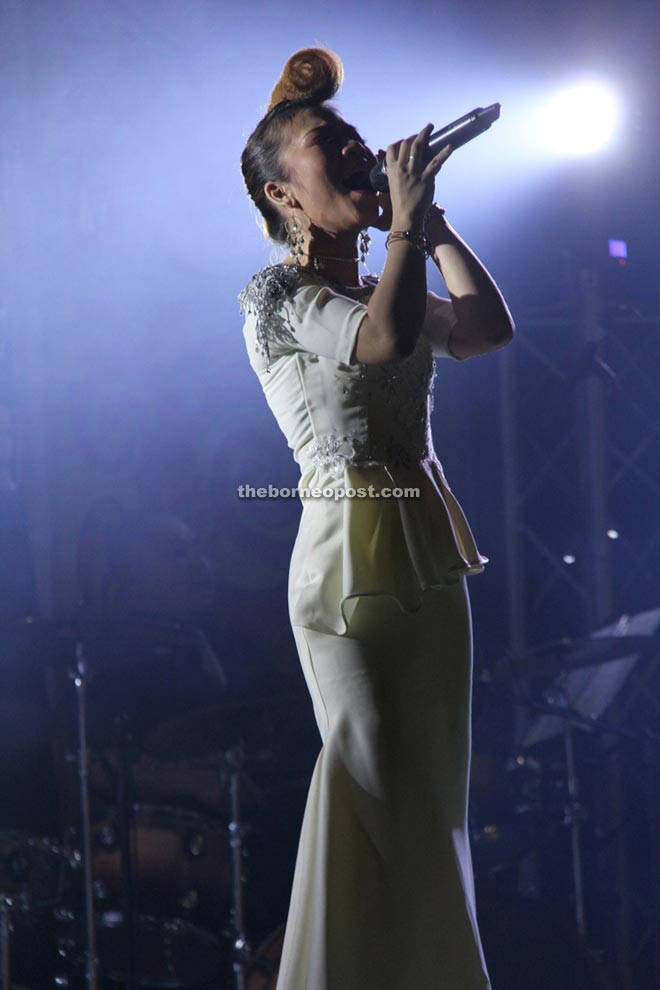 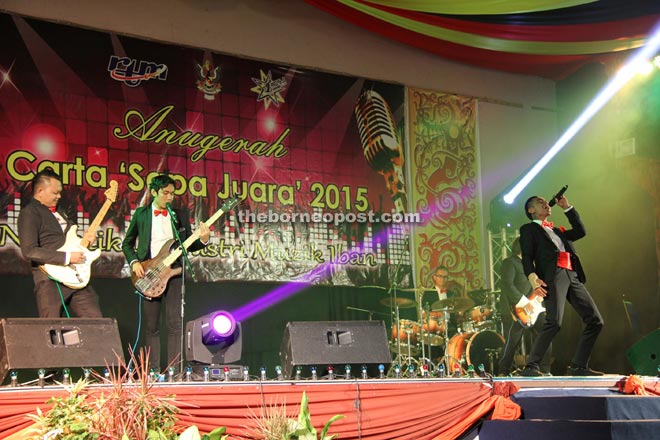 Sullivan, one of two bands making it to the grand final, gets the crowd all excited with their hit ‘Bakani’. 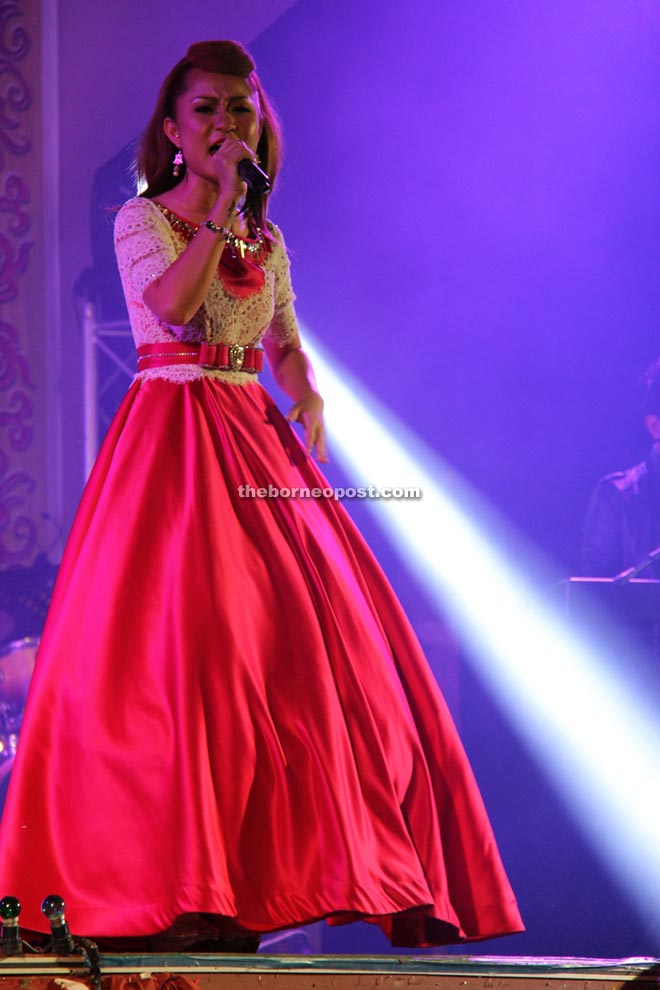 Melissa gets all soulful with her love ballad ‘Pengerindu Tua’. 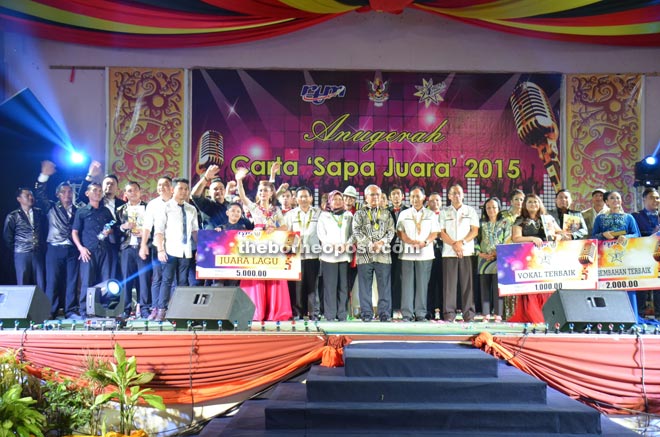 However, Melissa Francis reigned supreme in the championship, beating 11 other finalists to claim the coveted overall winning title in view of the 5,000-strong crowd filling up Tan Sri Datuk Amar Stephen Kalong Ningkan Hall that night.

The songstress walked away with RM5,000, a trophy and a certificate.

“I am very happy and grateful for the win.

“The song ‘Pengerindu Tua’ is very meaningful to me because it tells the story of romance, which is close to my heart,” she said, adding she went through two weeks of intense training and preparations before the grand final.

Melissa said she would share her winnings with her family, friends and fans who had always been supporting her in the industry.

“I might bring them for a dinner. Apart from that, I will also use the money to produce my new album. The yet-to-be-entitled album will include six songs and is expected to be released by the end of this year,” she said.

The grand finale was hosted by DJ Rajesh and DJ Stephanie of Wai.FM.

There were also other subsidiary titles up for grabs that night. Florence Lo, with her captivating performance of ‘Ai Mata Lelengau’ won the ‘Best Vocal Award’, while Eisner Nala bagged the ‘Best Performance Award’ with her soulful rendition of ‘Penyayau Tebeleka Ketegal Pemula’.

The ‘ACSJ 2015 Most Favourite Artist Award’ was clinched by Rickie Andrewson through votes conducted by ACSJ official magazine ‘Senawah’, while ‘ACSJ 2015 Most Sporting Artist’ honour was bestowed upon Kelabu Papau for his cooperation in the management of the competition – despite him not being a finalist.

They were accompanied by music performed by Kombo RTM.

The ACSJ 2015 is an initiative of Sarawak Broadcasting Department and Wai.FM, Miri.FM and Sibu.FM, in collaboration with Betong Resident’s Office, to uplift the Iban music industry.

The finalists were those who topped Wai.FM’s ‘Carta Sapa Juara’, Miri.FM’s ‘Carta Lagu Tebilang Iban’, and Sibu.FM’s ‘Carta Hits Lagu-Lagu Iban’, as well as based on votes throughout last year.

The semi-finals were held at RTM Sarawak on Aug 22 to choose the final 12.