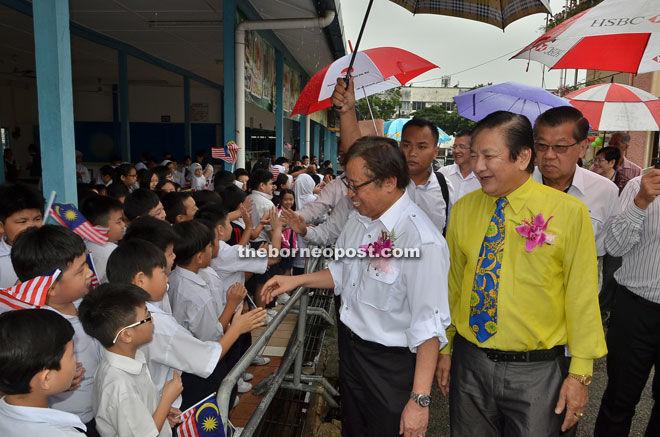 Abang Johari (left) greeting students of SJK Chung Hua No. 4 during his working visit to see the condition of the school yesterday. Accompanying him is Wong (right).

KUCHING: The state government’s strong emphasis on assisting Chinese medium schools shows it values the importance of having a multilingual society in order to remain competitive in the increasingly globalised world.

Thus it is practical for the government to focus on empowering Chinese schools considering that the Chinese language is widely spoken by 20 per cent of the world’s population of seven billion today, Housing Minister Datuk Amar Abang Johari Tun Openg said.

To become a global player, he said the state government had to start planning on producing a society that is able to integrate with everybody, particularly with the world’s major economic powers.

“In this globalisation era where business and economic opportunities are endless, languages such as Mandarin

and Hindi will become as significant as English as the number of people speaking the languages is increasing, he said.

He said the world’s two most populated countries – China and India – together constitute about 37 per cent of the world’s population.

Other languages he mentioned as equally important included Japanese, Korean as well as the Malay language that is spoken in Indonesia, Singapore and Brunei – in light to the establishment of the Asean Economic Community (AEC) this year.

“In 2012, the world’s population was about 6.8 billion and over one billion comes from China alone. Considering that the Chinese have migrated to all parts of the world, it is important that we can communicate in Mandarin with this 20 per cent.

“It is good to be multilingual especially if we want to become a major global player,” Abang Johari said during his working visit to SJK Chung Hua No. 4 here yesterday, to present a RM500,000 cheque for the building of the school’s new multipurpose hall.

Abang Johari also said the state government was serious about Chinese education and would do all it could to assist Chinese schools.

He mentioned that Chief Minister Datuk Patinggi Tan Sri Adenan Satem had previously allocated RM4 million to assist Chinese schools and also promised another RM5 million to be given in the future.

The state government’s recognition of the Unified Examination Certificate (UEC) which allows UEC holders to join the state’s civil service and apply for scholarships or education loans from Yayasan Sarawak – in which Adenan is the chairman – has further demonstrated the importance of Chinese education in the eyes of the state government, he added.

Abang Johari regarded the move as very practical and would bring benefit to the state in the long run.

In this respect, he called on the Chinese community to give Adenan their strong support to enable him to continue fighting for the people. With the full backing from all communities, he said, Adenan would have the leverage when making requests from the federal government.

“If Adenan is not strong, Putrajaya will not listen,” he pointed out.