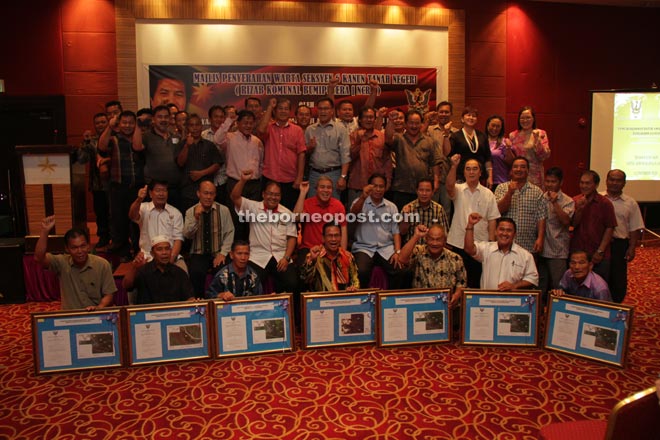 Awang Tengah (seated, fourth from left), flanked on his right by Arni and Dr Abdul Rahman, with representatives from the Lun Bawang, Malay and Tagal communities after presenting communal land reserves titles.

LAWAS: The state government has, as at September this year, surveyed 644,448 hectares of Native Customary Rights (NCR) land in 433 areas across the state under the perimeter survey initiative.

“Under Phase II, the Land and Survey Department will give priority to conduct individual lots surveys for the issuance of perpetuity land titles under Section 18 of the Land Code if they are already gazetted and free from disputes,” he said at a ceremony here on Sunday to present communal land reserves titles to Lun Bawang, Malay and Tagal communities.

In Limbang division, he said, 46 areas involving 11,087ha of NCR land had been surveyed, and 34 areas had already been
gazetted.

Calling for the cooperation of land owners in areas yet to be surveyed, he lamented that the LSD perimeter survey teams faced constraints in discharging their duties.

“There is overwhelming requests from NCR land owners all over the state. The department’s personnel have been told to move to the next place if there were disputes or court cases in areas under survey.

“Do not claim the whole mountain or land from sunrise to sunset. The Land and Survey Department also has their own records of NCR land.

On another matter, Awang Tengah said the government would continue with the traditional village settlement exercise. He advised village or community chiefs to alert LSD if certain areas were not included in the programme.