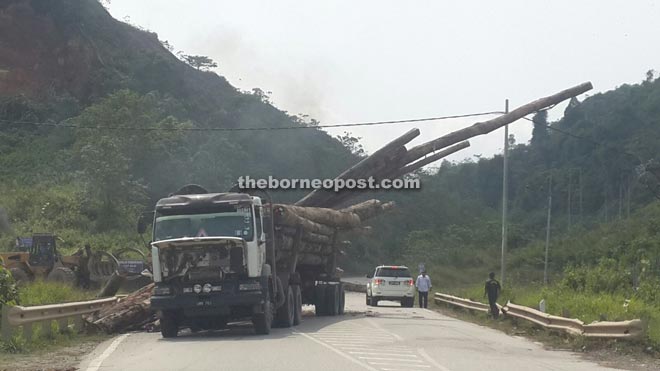 “Those behind phantom lorries have been left to rape our forests and cause destruction to our roads and highways for too long and with impunity. Something must be done to stop this,” he told The Borneo Post yesterday.

“They seem to fear nothing. The only way they can understand, or the word they respect, perhaps is ‘termination’ – termination of their logging licences.”

He was commenting on an accident that happened yesterday near Tubao Junction, along Bintulu-Bakun Road. In that incident, several logs, including a huge one, fell off a phantom lorry due to gross overloading and made the road impassable to traffic for an hour.

The accident occurred around 9am yesterday.

“These lorry hantus still operate day and night. These guys aren’t scared of anybody. Even the fear of God, which CM has threatened, doesn’t scare them,” said Land Development Minister Masing.

Lorries overloaded with logs is a common sight and they had ruined Bintulu-Bakun Road. Despite the government’s efforts to curb these irresponsible acts by erecting metal barriers along the road, the problem persisted.

The culprits even dared to destroy these barriers by ramming into them.

“One of the logs on the road was so big and so long that no cars could pass through. Even being in such a remote part of Sarawak, the incident created a traffic jam lasting for more than one hour.

“People from Sg Asap, Belaga, Murum and Bakun are all extremely upset. These lorry hantu drivers are endangering the lives of others, apart from destroying our roads. This has been going on for the last 15 years.”

He hoped the government would take really drastic action to stop this problem once and for all, saying the people had suffered long enough.

“Don’t wait until the people here get fed up and decide to take the law into their own hands.

“No one should be above the law, including the owners of these lorry hantus,” said Bit.