Sunday, May 22
You are at:Home»News»Sarawak»Abg Johari hopes to see more books on state’s history, heritage 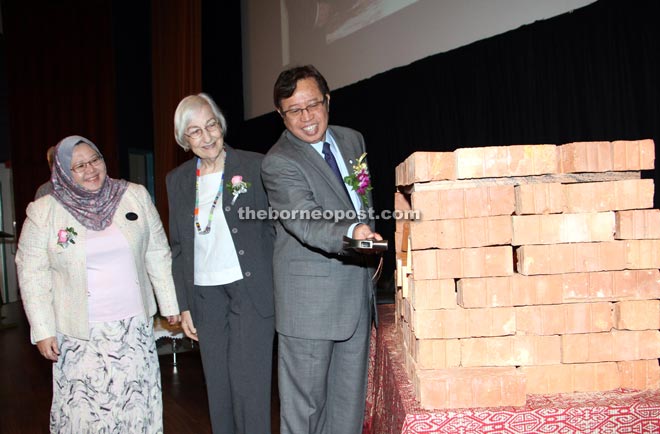 Abang Johari knocks down a brick wall to retrieve a copy of ‘Sarawak Historical-Landmarks’ in a symbolic gesture to launch the book. Looking on are Heidi and Arpah (left). — Photo by Chimon Upon

KUCHING: The state has many historical landmarks and heritage sites that need to be preserved and documented.

He further said, being a moderate state, Sarawak has many cross cultural heritages which further reflect the strong unity of the people and documenting them would be of great significance in preserving the multi-racial harmony in the state.

“We must recognise the fact that Sarawak is a model for the whole of Malaysia in terms of cultural and heritage cohesion. Kuching being recognised as City of Unity is a significant recognition in the part of the academic as well as the society on how we build this city reflects the whole of Sarawak. We need to preserve our cultural heritage,” Abang Johari said when officiating at the launch of a book ‘Sarawak Historical-Landmarks’ at the State Library here yesterday.

The book, written by local author Heidi Munan and published by Mucow Books Company, is a collaboration with the State Library under its Legal Deposit Division support programme. Also present was Arpah Adenan, head of the State Library depository services.

Abang Johari, who is also Housing Minister, commended Heidi’s work, saying the book has great significance in that it contained records and pictures that would be a source of reference for the future generations to shape the state’s future.

He likened Heidi’s collection of historical landmarks to the collection of specimens by famous naturalist and explorer Alfred Russel Wallace, whose collection of a Simunjan butterfly is on display in the Natural History Museum in Britain.

He suggested that a story be written on Sg Bedil, the site of Kampung Sungai Bedil Besar, where Rajah James Brooke took refuge during an uprising by Chinese miners from Bau more than 150 years ago during which the thundering sound of cannons to repel the rebels’ attacks could be heard from this village.

Meanwhile, Heidi, in her speech, said the book took about six months to write following 50 years of research on material culture and history of Sarawak. Born in Switzerland, she moved to New Zealand with her family in the late 50s. She met her husband Sidi Munan while studying in Auckland University where she obtained a Bachelor of Fine Arts, majoring in English and German, before moving to Kuching in 1965.

As a private curator and honorary curator of beads at the Sarawak Museum, she has ample opportunity to study and learn related subjects from indigenous experts and foreign scholars. She has published books, articles and papers on various topics related to Sarawak and Borneo.

“Many of the state’s historical landmarks are not particularly well known, even among Sarawakians themselves. This book tells about the tangible part of history, which we can still see. I’m selecting sites where historic events occurred, which still exist today.

“Historians will tell you about the fighting, invasions, heroism that helped to shape Sarawak but my book talks about where these traces are,” she explained.

‘Sarawak Historical-Landmarks’ provides a brief readable summary and illustration of the many interesting historical sites tucked away in all parts of the state. She hopes the book will fulfil expectations, while entertaining as well as educating readers.

At the event, five copies of Heidi’s new book were presented to the State Library depository.