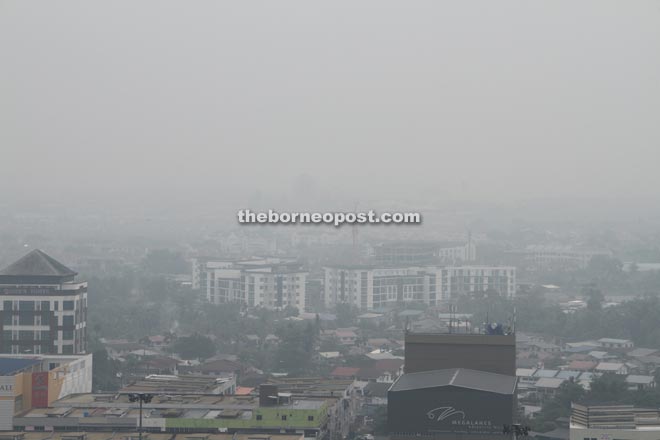 The city view taken at noon yesterday when air pollutant index was at unhealthy level. — Photo by Chimon Upon

KUCHING: Schools in Kuching, Samarahan, Sri Aman, Betong and Saratok are among those closed today due to the haze which did not show any sign of improvement.

According to the Education Ministry, all schools in Negeri Sembilan, Selangor, Putrajaya, Kuala Lumpur, Perak, Penang, Kedah and Perlis, and Bentong in Pahang will also be closed today.

In a statement yesterday, the ministry said 4,778 schools are affected, involving 2,696,110 students, and state education departments and district education offices had been instructed to immediately inform the schools and parents of the closure.

“The state education departments, district education offices and school administrations nationwide must continuously monitor the air pollutant index (API) and implement measures determined by the ministry when the API reading is at the unhealthy and very unhealthy levels,” it said.

Over here yesterday, Minister of Welfare, Women and Family Development Datuk Fatimah Abdullah confirmed that schools in Kuching, Samarahan, Sri Aman, Betong and Saratok would remain closed today and the public would be updated if there were more closures.

She pointed out that the haze this time was the worst in recent years as it not only affected public health but also education as schools had been closed for the past three days.

“The worst is the uncertainty of what is going to happen, so we are unable to give prompt answers to parents whether they need to send their children to school, and where would they place their children who are not going to school.

“The haze is disruptive to routine as well as causing an impact on the learning process of children. Not only they cannot go to school, they also cannot play outside,” she elaborated.

She hopes the haze problem can be tackled effectively in the future so that children’s education is not affected badly.

He said those prone to health complications, especially the very young and very old, are particularly sensitive to particles in the air.

As such, it is better to limit exposure or activities outside and stay hydrated, and children should not stay outside for extended period of time, he advised.

“Protect yourself by using face masks, preferably the N95 kind, which is most standard. For young children, there are paediatric face masks, which are the best options. If there are any symptoms of respiratory problems, go see a doctor as soon as possible.

However, there are superstitious people who say that if we want the smog to go away for good we should not keep talking about it and cursing it.

“Keep quiet and bear it, and before we know it, it will stealthily leave us and we will see clear blue sky once more,” said Saging, a 63-year-old farmer from Serian.

He conceded that the haze is mainly a man-made phenomenon, but said if people keep their cool, nature will help and send down rain to smother the smouldering grounds.

“A lot of people still blame the careless commercial agriculture carried out at the neighbouring country of Indonesia that has put us in such a suffocating misery. People say we feel the impact because most of the time, our air in this part of world is quite clear,” he said.

In some other countries around the world, haze seems like almost a permanent condition such as in cities like Beijing, China. 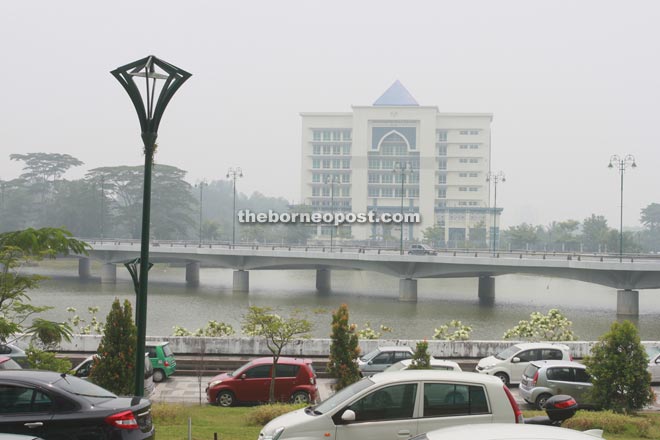 The air quality in front of the customs office yesterday was at unhealthy level. — Photo by Jeffery Mostapa

Browsing Google for haze around the world would give us information that besides the burning of forests, some chronic hazy conditions are the result of air pollution from industrial activities.

The haze has affected Indonesia since at least late June, eventually turning into an international problem for other countries from September.

It is the latest occurrence of the Southeast Asian haze, a long-term issue that occurs in varying intensity during every dry season in the region.

It is caused by forest fires resulting from illegal slash-and-burn practices, principally on the Indonesian islands of Sumatra and Kalimantan, which can then spread quickly in the dry season.

On Sept 4, the Indonesian National Board for Disaster Management stated that six Indonesian provinces had declared a state of emergency due to the haze; Riau, Jambi, South Sumatra, West Kalimantan, Central Kalimantan and South Kalimantan.

On Sept 14, a state of emergency was again declared in Riau, this time by the Indonesian government.

Thousands of residents of Pekanbaru, Riau’s capital, fled to the nearby cities of Medan and Padang.

In late September, the Pollutant Standards Index (PSI) of Indonesia hit a record high of 2,300, recorded in the province of Central Kalimantan.

More than 28 million people in Indonesia alone are affected by the crisis, and more than 140,000 reported respiratory illness.

School closures due to the haze have been implemented in Indonesia, Malaysia and Singapore; this affected nearly four million students in Malaysia alone.

Among the events disrupted or even cancelled due to the haze were the ‘2015 FINA Swimming World Cup’ in Singapore and the Kuala Lumpur Marathon in Malaysia.

Even a local event here in Kuching, the ‘Charity Walk with Happy’ organised by Lian Hua Seng Sdn Bhd had been postponed to Jan 10 next year.

Organising chairman Alex Lee said the postponement was due to the current haze situation, on the advice from a paediatric doctor that outdoor activities were not encouraged at the moment for health reasons.

The walk was initially set for Oct 25, with closing date for registration on Oct 10.

At least six of the ten countries in the Asean region have been affected by the haze, including southern Thailand and Vietnam and most parts of Brunei, Indonesia, Malaysia and Singapore.

The haze affecting Cambodia and Cebu in the Philippines is also suspected to have arisen from Indonesian rather than local sources.

In Vietnam, Ho Chi Minh City and other provinces in Southern Vietnam were enveloped in fog since Oct 4.

Vietnamese experts believe the phenomenon is partly caused by the fire in Indonesia.

According to the southern unit of the Vietnamese National Centre for Hydro-Meteorological Forecasting, many provinces and cities in the Mekong Delta have also experienced similar foggy weather since the beginning of October.

In Thailand, the haze from Sumatra has turned most parts of southern Thailand such as Narathiwat, Pattani, Phuket, Satun, Songkhla, Surat Thani, Trang and Yala provinces unsightly, even reaching hazardous levels on Oct 7.

The Phuket Provincial Health Office (PPHO) has since issued a health advisory to its residents in August and as of October the province saw a number of flight delays in Phuket Airport.

The air quality index in southern Thailand provinces have been increasing with the Regional Environmental Office (16) director Halem Jehmarikan saying the current air pollution level was the result of the wind direction and a low pressure area, preventing the haze from being blown away.

In Philippines, as of Oct 3, the island of Cebu suffered its seventh straight day of haze.

Therefore, it was suspected, although not confirmed, that the haze originated from Indonesian and not local sources, possibly as a result of monsoon winds blowing northeast from fires in Indonesia towards the direction of the central Philippines.

Philippines at first did not believe haze from Indonesia was reaching the country, but later suspected this due to the fact that the haze did not disappear within a day as per the usual haze that is particular to the region of Cebu City.

Meanwhile, latest updates on regional haze mentioned that hotspot activities in Sumatra and Kalimantan could not be fully determined owing to partial satellite pas and cloud cover.

Nevertheless, the southern half of Sumatra and large parts of the Borneo Island remained shrouded in moderate to dense smoke haze.

Some of the haze has spread to the Straits of Malacca and Peninsular Malaysia as well as the southern part of South China Sea.