Wednesday, February 8
You are at:Home»News»Sabah»US-Malaysia joint military exercise in Sabah
For the freshest news, join The Borneo Post's Telegram Channel and The Borneo Post on Newswav. 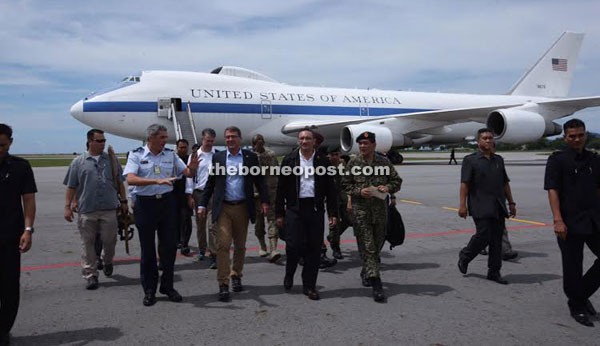 KOTA KINABALU: A joint military exercise between the United States and Malaysia will be held in Sabah at the end of this month.

“The exercises are KERIS STRIKE, CARAT, GPOI CAPSTONE, DCAT and COPE TAUFAN,” he said during a visit to the Sepanggar Naval Base with United States Secretary of Defence Dr Ashton Carter yesterday.

“In our bilateral meeting on the sideline of ADMM-Plus, we discussed a range of matters related to bilateral defence relations between Malaysia and the United States,” he said.

Hishammuddin and Carter then flew to Sabah where both of them were flown to the USS Theodore Roosevelt, a Nimitz Class Aircraft Carrier, which is currently based in international waters, 120 km off the coast of Sabah by MV-22 Osprey aircrafts.

Following the visit of the ship, they were flown to the Sepanggar Naval Base where the delegations held a closed door meeting and a tour of the base before flying back to Kota Kinabalu.

During the visit, Hishammuddin and Carter also discussed about the progress of current defence cooperation between Malaysia and the United States.

“In light of the positive development on the military to military exchanges which underscore the strong defence ties between both our nations, we would also like to reaffirm our commitment to promote and support further exchanges between our defence establishments,” he added.

Hishammuddin also extended an invitation to Carter to attend the biennial Defence Services Asia (DSA) Exhibition and Conference 2016 which will be held in Kuala Lumpur from April 18 to 21, 2016.

Meanwhile, Hishammuddin also received State Councillor and the Minister of National Defence of the People’s Republic of China, General Chang Wanquan at the Ministry of Defence in Kuala Lumpur yesterday morning.

The ministers discussed a broad spectrum of issues of strategic importance to Malaysia and China as well as current and emerging trends in the ever changing global security landscape.

The bilateral meeting between Hishammuddin and Chang reaffirmed strong ties between the two nations in the area of defence.

“It is our great hope that these strong ties, built on equal partnership and trust, will lead to mutual benefits for both our nations, especially in terms of maintaining regional peace and stability,” he said, adding that he also extended an invitation to Chang to attend the DSA Exhibition and Conference 2016.