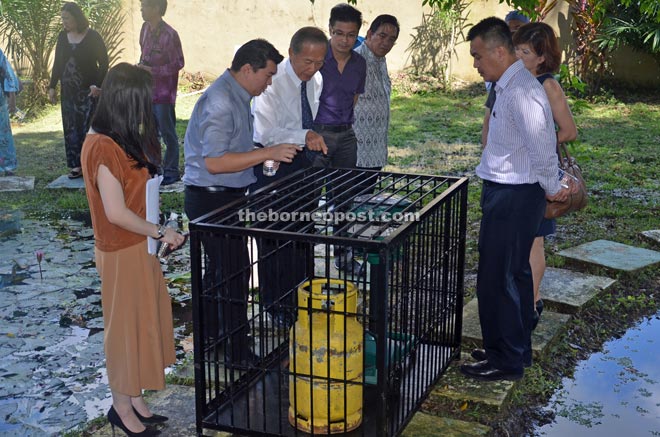 Tiong (third left) being briefed on how the device works by Loh (second left) while Wong (fourth left), Morshidi (right) and others look on.

Its chairman Datuk Tiong Thai King said for a start the project would be implemented at five localities, namely SMK Methodist, SMK Sacred Heart, Merdeka Road, Layang Layang Road and another yet to be ascertained.

“SMS will start with a pilot project before full implementation. The trial period of the ‘Mosquito Magnet’ will take basically four weeks to complete.

“Data will be collected and sent to Universiti Malaya (UM) for professional laboratory testing, and the results will be reviewed every week,” he said at the launching of the pilot project at SMK Methodist here yesterday.

Tiong said the council would seek further funding to implement the project in more locations, especially in public schools, parks and hot spots if the project achieved results.

He said the council would also intensify drain (120km long) clearing work at hot spots at a total cost of RM600,000.

“With this, we hope to better control, if not eradicate, mosquito breeding grounds,” he said, adding the project would hopefully be implemented in the first quarter of next year.

“We’ll seek funding from the state government,” he said.

According to him, Sibu had breached the outbreak level of dengue infection with 647 cases reported in 2014 and 907 cases in the period between January and Nov 2 this year.

He said with Sibu recording almost 67 per cent of the total number of dengue cases in Sarawak, there was an urgent need for the state government and SMC to work together with the public to combat the menace.

“Although the number of cases has tapered off in recent weeks, there is still the need to put proper control and prevention to ensure Sibu will not become a hotspot for dengue cases,” he said.

Meanwhile, ‘Mosquito Magnet’ was introduced in the country in early 2014 and has been tested with the relevant authorities and certification bodies before it could be sold in the market.

Its coverage area is up to one acre, operating uninterruptedly under all kinds of weather 24 hours a day and seven days week.

It works by emitting consistent and odourless stream of carbon dioxide, warmth and moisture into the air to attract mosquitoes.

Mosquito Magnet does not only attract and kill mosquitoes but also limits their repopulation by interrupting their breeding cycle and capturing a very large number of mosquitoes over time.

The device uses CounterFlow System technology, a highly effective and powerful suction system to vacuum mosquitoes into a net and the trapped mosquitoes will die from dehydration within 24 hours.