Sunday, September 19
You are at:Home»News»Sabah»Trio claim sighting of flaming UFO over Putatan

Rescue unit on standby at the scene.–Photo by James Tseu. 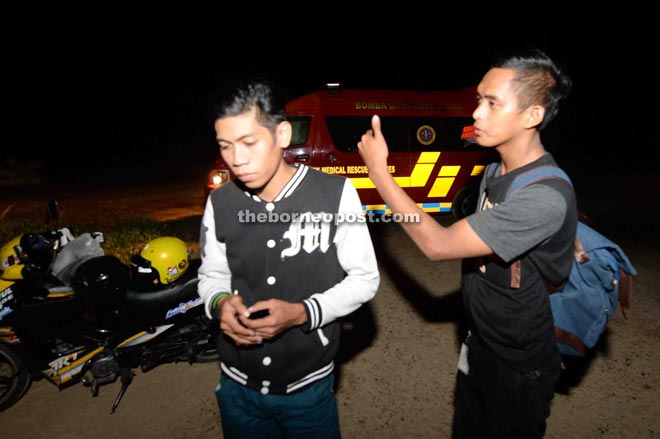 Shahrizal and Azmi describing what they saw.–Photo by James Tseu.

KOTA KINABALU: Three young men have claimed witnessing an unidentified flying object (UFO) that appeared to be burning, descending at Dumpil Bay, Putatan, on Monday. However, the authorities have dismissed the claim as a hoax after a fruitless search in the area.

The three young men, Shahrizal Matusin, 20, Rozaidin Alimudin, 24, and Azmi Lamjin, 28, were reportedly heading back to Lok Kawi on their motorcycles after attending their friends’ birthday party around 1.30 am on Monday when they spotted a huge burning object shaped like a plane slowly descending into the sea 50 metres away near the Lok Kawi Army Camp.

The trio immediately halted their motorbikes to get a closer look but the sea appeared to be calm as usual and the unidentified object seemed to have disappeared into thin air.

They subsequently informed the police who conducted a search with a rescue unit. The search ended four hours later.

Penampang police chief DSP Rosley Hobden later confirmed that the sighting could be a hoax as the Department of Civil Aviation (DCA) had no report on any flying objects or a crash on its radar at that time.