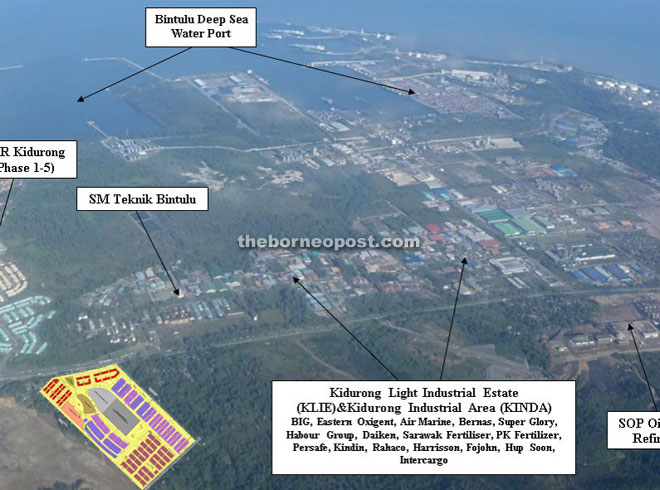 An aerial view of Kidurong which offers vast economic opportunities.

BINTULU: Kidurong area will become a major high growth area for commercial and economic related activities in the near future.

According to Robert Ting, the managing director of a property consultant firm in Malaysia, CH Williams, Talhar, Wong & Yeo Sdn Bhd, most of the new shophouse projects
were concentrated in the (Bintulu) town area in the 2000-2015 period, a preferred and designated zone for commercial development.

He, however, said Kidurong was fast catching up in recent years as commercial centres were springing up in the area.

The total number of shophouses completed in 2014 showed a drastic increase with 507 units completed, largely due to the Bintulu Sentral Commercial Project at Jalan Kidurong, which alone offered 352 units.

“We also foresee that over the next few years more than 50 per cent of shophouse development will be concentrated in the Kidurong area, showing the need for commercial space in view of strong economic activities in Kidurong and Samalaju,” Ting added Kidurong houses the largest single complex unit of Liquefied Natural Gas Plant namely the MLNG 1, 2 and 3 in the world and the pilot Shell MDS (Middle Distillate Synthesis) plant which produces 100 per cent pure petroleum from gas and many other downstream industries.

Ting added: “The lure of good employment and business opportunities in Bintulu as the industrial hub of Sarawak is further enhanced as a growth node of Sarawak Corridor of Renewable Energy (SCORE). Bintulu will continue to see strong population growth due to the migration of people from other parts of Sarawak.”

The demand for housing and other amenities, he added, had manifested itself in the spatial spread away from the town centre as shown by recent developments being concentrated in the sub-urban areas such as Jalan Tun Hussein Onn and Jalan Kidurong.

“It is observed that most of housing and rental needs are concentrated in the Kidurong area and its proximity due to the high economic activities and growth of the oil and gas, oil palm and other industries in northern Bintulu such as Kidurong Industrial Area and Kidurong Light Industrial Area,” he said.

Ting said the all-weather Bintulu Deep-sea Port was also an important catalyst making Kidurong a successful industrial and transportation hub in the region.

Previous ArticleSarawak off to flying start in Boys U13, Girls U13
Next Article 40 take part in aquarium decorating contest