Saturday, October 8
You are at:Home»News»Sarawak»Society cries foul over building of new Waterfront Hotel 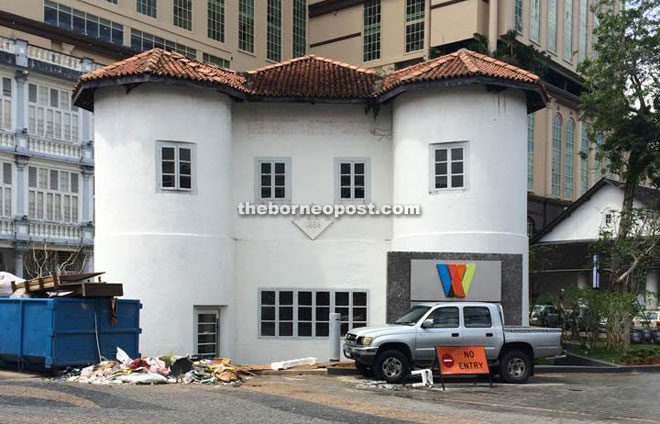 The hotel’s signage claimed by Shepherd to have obscured the view of the historic Round Tower at Jalan Tun Haji Abang Openg.

KUCHING: Sarawak Heritage Society (SHS) has cried foul over the construction of the new Waterfront Hotel which it claimed to have encroached into heritage properties in the city.

Its president Karen Shepherd said the hotel with its connecting shopping mall, Plaza Merdeka, should not have been allowed in the first place as it replaced the old Treasury building and was now encroaching even further on all heritage properties surrounding it.

“The society is begging the state’s planning authorities to intervene in this and all future applications for similarly intrusive projects because there is little point in rescuing heritage properties one at a time, if new buildings are allowed to dwarf over them and remove all the context of the area,” she said in a statement yesterday.

Shepherd said while the literature for the hotel promised guests a commanding view of the surrounding areas and the many historical architectural landmarks, it was a ‘shame that none of the other residents in Kuching will be able to enjoy the same now that the new hotel has blocked their view’.

She also claimed that the hotel had obscured the view of another heritage property namely, the Round Tower (built in 1886), by putting its ‘enormous signage’ directly in front of the tower.

“The shopping centre and hotel have already been allowed to commandeer two sections of public road for the exit and entrance to the car park. Now, they have erected barriers across the cut through between India Street and Carpenter Street through the Japanese building.

“Are ordinary Kuching citizens to be prevented from using this area? What is next? Will they build a high rise on the site of the General Post Office or will they convert Padang Merdeka and the surrounding areas into a car park for Plaza Merdeka staff?.”

She said there was no point in building hundreds of hotels here if the authorities were allowing these to replace the very reason tourists came to Kuching in the first place.

“Tourists come to Kuching or any other city to see and experience their uniqueness. Putting up generic franchises does not make a place unique.

“Once the visible evidence of the heritage story of Kuching is obliterated, tourists will no longer have any reason to stay here other than a trip to the Sarawak Museum, then out to Semenggoh Wildlife Centre and beyond,” she said, and urged the planning authorities to consider why there was a need for so many shopping malls to be built here at the expense of heritage value and green space.

Shepherd added it was up to the state’s planning authorities to control the development of a city so that ‘rampant commercialism, which ultimately benefits a small number to get rich, does not simply just override all other concerns of the many, including pedestrian access, easy flow of traffic, as well as the character, life and beauty of the city’.

“Therefore, SHS is asking the authorities to preserve the heritage of the city so that, in future, the people of Kuching can have a beautiful town to be proud of.”

“I have engaged Hans Van De Bunte and have had discussions with him on this (the signage). The sign is not encroaching on heritage properties as the proper approvals have been obtained.

“Hans has also suggested alternate locations for the sign and we are considering this subject to the authorities’ revision of the approval,” he explained, adding that there were also other issues and people that the management needed to speak with before anything could be finalised.

On Shepherd’s claims that the hotel was obstructing the scenic views of Kuching’s many historical landmarks, Ng, who is also Plaza Merdeka Holdings managing director, begged to differ.

“That is her personal opinion and I have had numerous people who have commented (directly and indirectly) that we are a welcome addition to Kuching’s heritage district,” he said.

He also assured that the management from both the hotel and shopping mall would continue to work with their neighbours as well as the state government to bring value to Kuching’s community, both commercially and culturally.