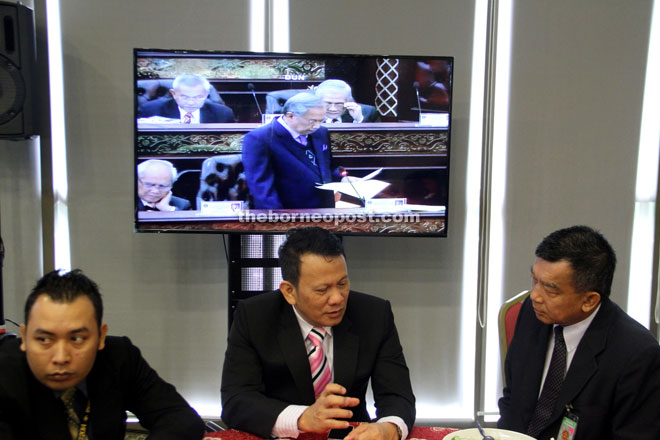 DUN IN SESSION: Chief Minister Datuk Patinggi Tan Sri Adenan Satem is seen tabling the State Budget 2016 during the State Legislative Assembly (DUN) sitting which was screened to members of the media in the Media Room at DUN Complex yesterday. — Photo by Chimon Upon

THE Sarawak Budget 2016 will continue to be development biased and rural focused with RM5.97 billion or about 74 per cent of the total budget proposed for development of which RM2.65 billion would be used to narrow the gap between urban and rural development.

“To stimulate a desirable level of economic activities and sustain economic growth, Budget 2016 will continue to be a development biased budget with RM5.97 billion or about 74 per cent of the total budget is proposed for development and RM2.07 billion or 26 per cent for operating expenditure.

“To narrow the development gap between urban and rural areas throughout the state, the budget will provide higher allocation in 2016 amounting to RM2.65 billion as compared to RM2.35 billion in 2015 and RM2.19 billion in 2014,” he said in the august House.

Adenan pointed out that the higher allocation for rural development “is also in line with our commitment to give greater focus on programmes and projects for rural areas to further accelerate rural transformation.”

It was also to open more opportunities for development in rural areas to benefit the rural communities, he said.

Sarawak, he said, would continue to consolidate its financial position to ensure its long-term financial sustainability

“The 2016 Budget continues to propose an estimated budget surplus.

“It will continue to give special focus on enhancing the effectiveness of the state government financial management and efficiency of its delivery system.

“Growth will be driven by productivity and efficiency. Concerted efforts must be made to optimise the use of available resources including equipment, facilities and human capital and at the same time reduce wastage. And, the private sector shall remain as the main engine of growth.”

Adenan said the 2016 budget proposal was expected to generate a budget surplus of RM175 million.

This is on the basis of expected total revenue of RM5.55 billion against a total ordinary expenditure amounting to RM5.37 billion, he added.

“It is important for the state to have a balanced and surplus budget to ensure its financial position continues to remain sound and healthy.”

Of the RM5.37 billion proposed for ordinary expenditure for 2016, he said, RM3.3 billion would be appropriated to the Statutory Funds to finance development programmes and projects, and a sum of RM2.07 billion for operating expenditure.

The proposed RM2.07 billion for operating expenditure marked an increase of RM214 million or 12 per cent over the revised expenditure of RM1.86 billion allocated for this year, he said.

Of the total provision for development expenditure, Adenan said RM5.74 billion would be funded by the state while RM231 million financed by the federal government through reimbursable loans and grants.