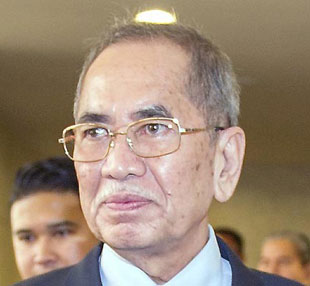 KUCHING: Malaysia is committed in maintaining at least 50 per cent of forest and tree cover in perpetuity through ‘zero net deforestation and degradation’; thus, halting net forest loss by deforestation and stopping net decline in forest quality.

This would be achieved by reforestation and enrichment of degraded land to increase carbon sequestration and mitigate climate change effects, said Natural Resources and Environment Minister Dato Sri Wan Junaidi Tuanku Jaafar in his speech for joint high-level segment of COP21/CMP11 in Paris, France on Dec 7.

“Additionally, Malaysia has also implemented the reduction of emissions from deforestation and forest degradation (REDD+) which saw an estimated total of 97.5 million tonnes of CO2 (carbon dioxide) emissions avoided through improved forest management for the 2006-2010 period.

“However, our financial, technical and capacity limitations, among other things, can hinder our progress and efforts to manage and conserve these natural resources. In this regard, external funding can offer viable solutions,” he said.

Wan Junaidi mentioned that Malaysia too was very concerned about adaptation and programmes on flood mitigation, which alone had accounted for more than RM9.3 billion in spending in the ninth and 10th Malaysia Plans.

He also said further funding would be required for the implementation of mitigation programmes from next year onwards, and Malaysia had developed action plans to enhance water security under the National Water Resources Policy that must also be implemented.

“Malaysia has demonstrated its commitment in addressing climate change. We would like to urge developed countries to fulfil their obligations as stipulated under the ‘Convention’, which includes the COP16 decision that developing countries should receive financial resources.

“This obligation encompasses providing means of implementation, including technology transfer and capacity-building for developing countries. Malaysia supports the centrality of the United Nations (UN) Framework Convention on Climate Change (UNFCC), the importance of equity and transparency as well as the ‘Principle of Common but Differentiated Responsibilities’ (CBDR),” he elaborated.

Wan Junaidi said Malaysia would look forward to the adoption of a fair and balanced agreement, urging all parties to undertake ambitious emission reduction targets for future generations.

He recalled that in 2009, Prime Minister Datuk Seri Najib Tun Razak announced that Malaysia had adopted a voluntary indicator to reduce its greenhouse gas (GHGs) emissions intensity of GDP (Gross Domestic Product) by up to 40 per cent, compared to 2005 intensity levels by 2020 — conditional on receiving finance, technology transfer and capacity building from developed countries.

Malaysia had incorporated measures to address the issues of climate change, environmental degradation and sustainable utilisation of natural resources under the 10th Malaysia Plan (2011-2015).

This plan had resulted in Malaysia achieving a 33-per cent reduction in emissions intensity of GDP by 2013.

During this time, the energy sector was the major contributor to national GHG emissions. The sector was prioritised for mitigation action and saw the introduction of the Renewable Energy Policy and the Renewable Energy Act in 2011 — both of which enabled the launching of the Feed-in Tariff (FiT) mechanism to accelerate renewable energy (RE) growth in Malaysia.

The effort would be continued under the 11th Malaysia Plan (2016-2020) under the ‘Green Growth Agenda’, which calls for strengthening the enabling environment including policy and regulatory frameworks, human capital and green technology.

“In addition, investment and financial instruments will be further strengthened. The Green Growth Agenda takes a broad approach that includes conserving our biodiversity. I would like to highlight that Malaysia’s forest cover to date stands at 54.5 per cent,” Wan Junaidi pointed out.

In his speech, he also conveyed Malaysia’s profound condolences to the people of France on the recent attacks, saying: “We expressed our solidarity and support during these difficult and challenging times.”