Thursday, February 2
You are at:Home»News»Sarawak»Matang-Stapok dual-carriageway project may be slightly delayed, says MP
For the freshest news, join The Borneo Post's Telegram Channel and The Borneo Post on Newswav. 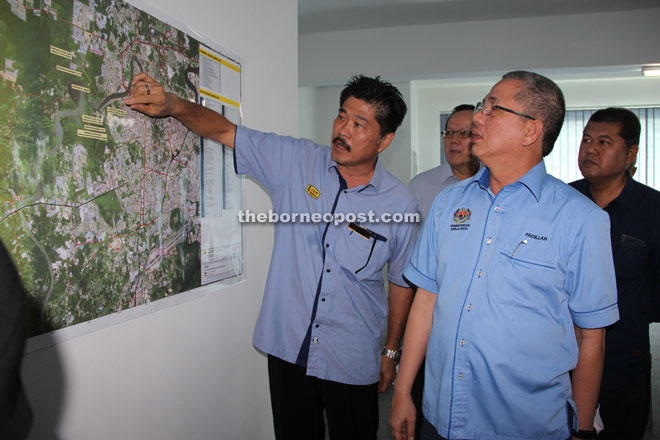 Tan (left) briefs Fadillah on the progress of the project.

According to him, the current rate of completed work since its launch in April this year is 6.81 per cent, instead of the targeted 12.02 per cent.

This, Fadillah said, meant that the 30-month completion period for the project could be further delayed by 36 days.

“I hope the delay would not reach 60 days as according to my ministry’s SOP (standard operating procedure), a project with 60-day delay is considered a ‘sick project’. Should that happen, we have no choice but to look for a new contractor to complete the (Jalan Matang) project,” he told reporters in a press conference in Matang Jaya yesterday, held after the inspection of the project.

Fadillah who is Petra Jaya MP hoped that his constituents in the area would be patient as the developers were working out solutions to kick the project back on schedule.

“There have been a number of factors contributing to the delay such as delay in receiving construction equipment from China, relocating squatters away from the construction site, and negotiations between the developers and land owners.

“The developers are also planning to increase the number of workforce and order more state-of-the-art machinery to expedite the works,” he said.

Upon its scheduled completion in October 2017, the dual-carriageway road project is expected to resolve the daily traffic congestions affecting Jalan Matang and parts of Petra Jaya. The work will include the construction of a 320m reinforced concrete bridge across Sarawak River, designed to accommodate a six-lane road in the future. It will connect two new roundabouts — one at Jalan Matang and another at Jalan Temenggong Tan Meng Chong.

According to Public Works Department (JKR) Sarawak manager for southern region office Vincent Tan Chok King, the federal government is chipping in RM122 million for the project, with JKR tasked with ensuring that the project reach completion 30 months after its ground-breaking in April this year.

“This 4.4km road is of JKR’s U5 standard. It will start from the E-Mart roundabout (at Jalan Matang) and reconnects with the city centre via Jalan Stapok.”

Tan said apart from that, the scope of work would involve building a 2.9km road and upgrading the existing single-lane 1.5km stretch into four lanes.