Thursday, February 2
You are at:Home»News»Sarawak»Underpass at Petra Jaya roundabout to be built soon
For the freshest news, join The Borneo Post's Telegram Channel and The Borneo Post on Newswav. 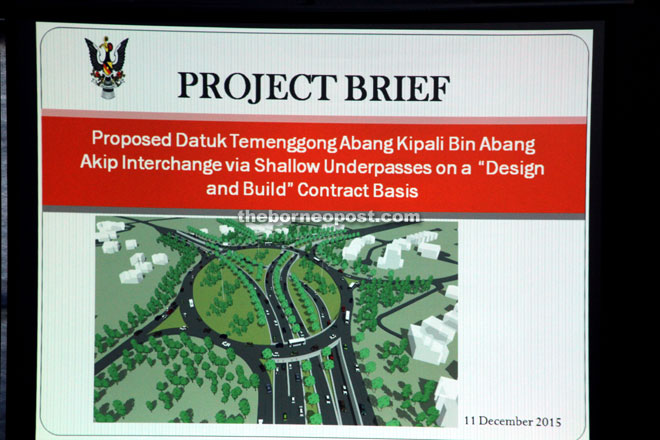 A slide shows the interchange project at Datuk Abang Haji Kipali Roundabout. — Photo by Chimon Upon

KUCHING: The proposed underpass at the Datuk Abang Haji Kipali Roundabout in Petra Jaya will be built very soon now that the project has been awarded to a contractor.

The interchange will be built via shallow underpasses on a ‘Design and Build’ contract basis.

Speaking to reporters at a press conference in Matang Jaya yesterday, Works Minister Datuk Seri Fadillah Yusof said a research revealed that an underpass would be more suitable for the area instead of a flyover.

“The contract sum for this project is RM67 million and the contract period is 24 months. The date of completion is Nov 25, 2017,” he added.

Traffic congestion in Petra Jaya would be solved once the underpass was completed.

“The underpass concept is new, cleaner and capable of easing traffic congestion,” he added.

Fadillah hoped the public would understand that the standard of roads built in the country was based on the budget from the government.

“As the ministry responsible for building roads in the country, I can say that we can only spend according to the amount of budget allocated by the government,” he said.

Before the press conference he and other officials from his ministry, Public Works Department and local councillors took time to inspect the dual carriageway project from E-Mart Roundabout in Matang to Stapok.

The project is scheduled for completion on Oct 1, 2017.