Friday, May 20
You are at:Home»News»Sarawak»Facelift for Sarawak Riverbanks 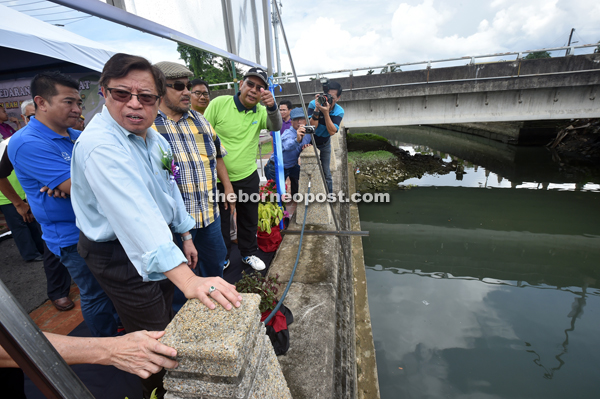 KUCHING: Both banks of Sarawak River will go through major transformation under various beautification projects initiated by the government, which are expected for completion by 2018.

According to Tourism Minister Datuk Amar Abang Johari Tun Openg, one of these upcoming projects is the construction of a 1km walkway/waterfront stretching from Kampung Tanjung to Kampung Sungai Bedil, of which initial cost is estimated to be between RM8 million and RM10 million.

“This project will be under the prerogative of the (federal) Natural Resources and Environment Ministry as part of its national projects under the 11MP (11th Malaysia Plan) by the end of next year,” he said during a press conference held after the launch of a community awareness programme ‘Jum Berambeh Rah Sungai Bintangor’ at Kampung Bintangor here yesterday.

Abang Johari, who is also Housing Minister, said the landscape along both riverbanks would complement the Darul Hana Urban Redevelopment, as well as the whole city, upon the completion of both projects.

He further assured those living along the river that their livelihood would not be adversely affected by the Kampung Tanjung-Kampung Sungai Bedil Waterfront as an outward extension of the riverbank would be carried out.

“The embankment project will go further into the river. We strive also ensure that the walkways would have lots of greeneries; we will try to avoid (having too many) concrete materials,” he said.

At a separate event on Friday night, Abang Johari — who is Satok assemblyman — also said under 11MP, there would be a construction of a waterfall in front of the iconic Fort Margherita.

This unique water-cascading  structure, he added, would include the usage of LED lights slated to illuminate the surrounding compound and add further to the aesthetics of the area.

On another note, Abang Johari said the national river project under the Natural Resources and Environment Ministry would include the clean-up and preservation of Sarawak River and its three main tributaries —Sungai Bintangor, Sungai Maong and Sungai Padungan.

According to the minister, all these tributaries have been classified as ‘polluted’. This, he said, was the trigger for the collective effort between state and federal agencies, and also the local communities towards saving the rivers.

“So far, Sungai Bintangor has improved following various awareness programmes and clean-up projects being carried out since 2006.”

He disclosed that as at 2011, there were 6,166 people living near Sungai Bintangor and its catchment area. Property-wise, he said the area had 607 village houses, 249 semi-detached units, 249 terraced houses, 207 apartments and 1,035 commercial units.

Meanwhile, state Drainage and Irrigation Department (DID) acting director Chok Moi Soon said the event was a success, thanks to the participation of Kuching North City Commission (DBKU), National Resources and Environment Board, Sarawak Rivers Board and the state Public Works Department.

“Under the ‘1Negeri, 1Sungai’ (One State, One River) initiative, we have to ensure that the rivers are clean and ‘alive’, through improvements works and awareness programmes,” he said.

Chok added that once the river and its riverbanks were clean, the community should keep up with the good work so that the area would continue to be a good place to hold recreational activities.