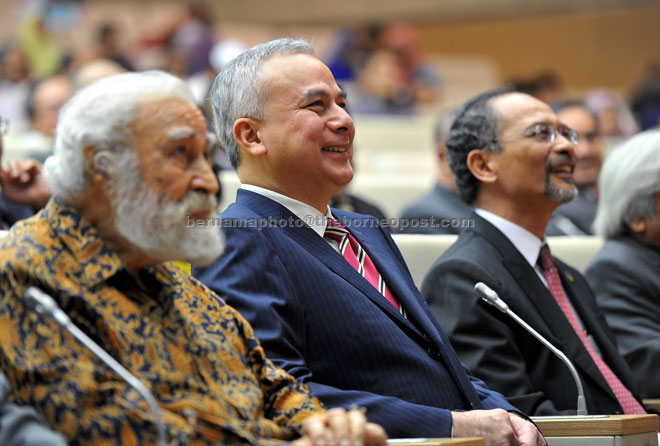 Sultan Nazrin (centre) having a light moment after officiating at the Islamic Banking and Finance Institute Malaysia (IBFIM) ‘On Justice And The Nature Man’ at Sasana Kijang in Kuala Lumpur. — Bernama photo

KUALA LUMPUR: The Sultan of Perak said people entrusted with public office must be ‘the Keepers of Justice’, safeguarding the nation for future generations.

Sultan Nazrin Muizzuddin Shah said that Malaysians could be regarded keepers of justice “only when we ourselves are able in turn to bequeath our nation to our sons and daughters in the original — if not in an even better state — which we inherited from our Founding Fathers.

He quoted Tunku Abdul Rahman, the first Prime Minister of Malaysia, as describing the inheritance as follows: “Justice before the law, the legacy of an efficient public service, and the highest standard of living in Asia. The Sultan said this when launching a book titled ‘On Justice and The Nature Of Man’ by Muslim philosopher Tan Sri Prof Syed Muhammad Naquib al-Attas here yesterday.

He also alluded to what the Tunku said about the principles of a sovereign and democratic nation and the seeking of the welfare and happiness of the people.

“In my estimation he perfectly summed up the natural consequences of our actions when we, the Keepers of Trust, uphold justice in all aspects of our lives, including the way we run our nation,” His Highness said.

Nazrin who quoted verses of the Quran and prominent figures on man, justice and life, said: “So long as we are true to ourselves and are guided by the sense of justice that God has created through our human nature — that unique and special creation of God that is in fact mankind — the pursuit of happiness will not only be realised as one of our unalienable rights as individual human beings, but also that we will be able to achieve a just and happy society.

He noted that Prof Syed Muhammad Naquib, in his 57-page book, had written a commentary on justice and the nature of man-based on two verses from the Quran. — Bernama