Monday, May 23
You are at:Home»News»Sarawak»Dewi creates history of sorts again with Swinas 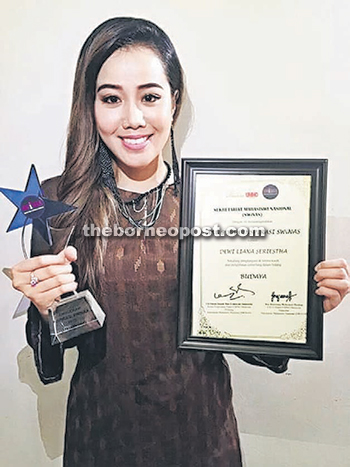 Dewi with the award she received from Swinas.

KUCHING: A local lass Dewi Seriestha who created history of sorts for Malaysia internationally has added another award to her collection when she received another one recently.

She was given the Seketariat Mahasiswa Nasional (Swinas) Inspiration Award for making the nation proud and carrying Malaysia’s name with pride.

“The occasion was held specially to acknowledge the efforts of students who are active and have given contributions in their respective fields to make the nation proud,” he said.

Weeks prior to the occasion, the Bidayuh lass from Kampung Tematu, here, won the Asia Golden Award 2015, also held in Kuala Lumpur.

She won the title for her series of achievements such as becoming Miss Malaysia World 2014, Miss World Talent 2014 in London and was the champion of world (classical) in Los Angeles, California.

Yudhi, who was in Kuala Lumpur most of the time, flew back here with Dewi yesterday to attend another award presentation ceremony at one of the leading hotels here last night.

“The award this time is from Pekema (Vehicle Importers Association) to Dewi for her achievements and making the state and country proud.

“Personally I want to express my greatest gratitude to Pekema for being the first to accord such recognition to Dewi at the state-level,” he said.

Previous ArticlePAC to summon 1MDB chief, ex-chief in Jan
Next Article Mass graves: Malaysian police yet to arrest anyone