Tuesday, August 9
You are at:Home»News»Sarawak»Giant’s latest mall a boon for many 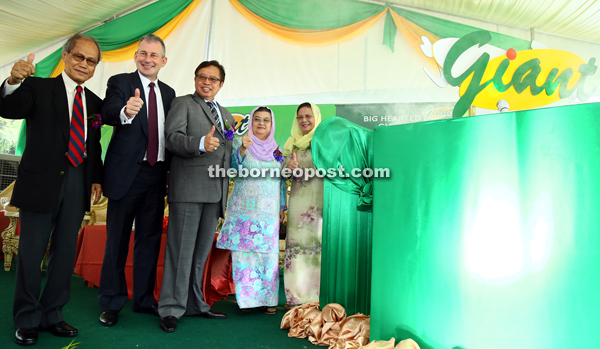 KUCHING: The establishment of Giant Hypermarket in Petra Jaya is a blessing for everyone in the area as it helps to create opportunities in various aspects.

Chief Minister Datuk Patinggi Tan Sri Adenan Satem said the opening of the new Giant Petra Jaya Mall by GCH Retail (Malaysia) Sdn Bhd would not only provide convenience to shoppers living in the area but more so to create business opportunities for small and medium enterprises (SMEs).

“It will create many opportunities and provide shopping conveniences to local residents and from other areas as well. It will also help to create businesses for the local suppliers,” he said in his text of speech read by Housing Minister Datuk Amar Abang Johari Tun Openg at the opening ceremony yesterday.

Adenan said the state government was aggressively encouraging the growth of SMEs and to facilitate this, new industrial estates in the rural areas would be developed under the 11th Malaysia Plan. He hoped that Giant would be able to work together with the SMEs in Sarawak in whatever ways possible.

He added that with so many retail stores, Giant should be able to take gigantic steps to help the community where it operates and it was up to the SMEs to take advantage of the business opportunities made available by Giant.

“Of course, we already have some SME companies making inroads in the food business, such as laksa paste manufacturer MUSC Food Industries and carbonate soft drink manufacturer Cinqasa.

“Some local SMEs have even achieved success at the national level. Kitten Food and Sarawak Biscuit & Food Manufacturing

are among home grown companies that have made their mark beyond Sarawak’s shores,” he said.

With the construction of Pan Borneo Highway, it would create better link for farmers to send their goods directly to the buyers, with Giant certainly one of them.

“From the rural areas, we have pepper farmers, vegetable growers, and poultry and fish breeders who should be able to market their products to the urban folk,” he said.

The newly opened Giant Petra Jaya Mall, the eighth store in Sarawak and the fourth in Kuching, is the biggest retail store in the state with 128 retailers and 459 car parking lots.

GCH Retail (Malaysia) regional director (Malaysia & Brunei) Dato’ Tim Ashdown in his welcoming remark said an investment of RM128 million for a built-up area of over 320,400 sq ft in Petra Jaya was a testament of Giant’s confidence in the state’s economy. He said Petra Jaya was chosen because of its strategic location – close to the state’s administrative centre.

“We believe in supporting the community we have a presence in and through our venture in Sarawak until today we have employed nearly 600 locals and the number will certainly grow with our other plans in the state,” he said.

Ashdown said Giant Petra Jaya alone would employ around 280 staff and by June next year it was expected to employ 40 more once its distribution centre came into operation.

“I am proud to say that we have been actively creating opportunities for the people of Sarawak, local traders and entrepreneurs,” he said. 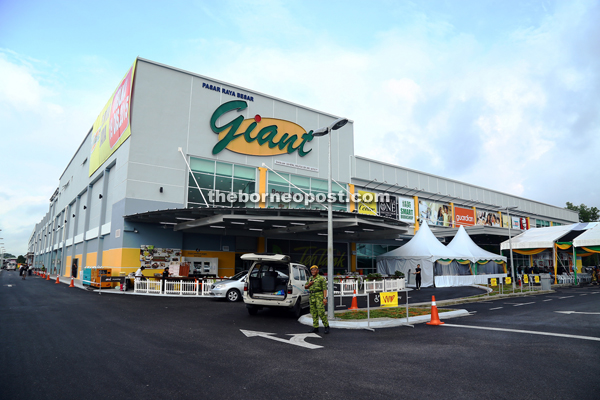 Newly opened Giant Petra Jaya Mall, which is its biggest in the state.