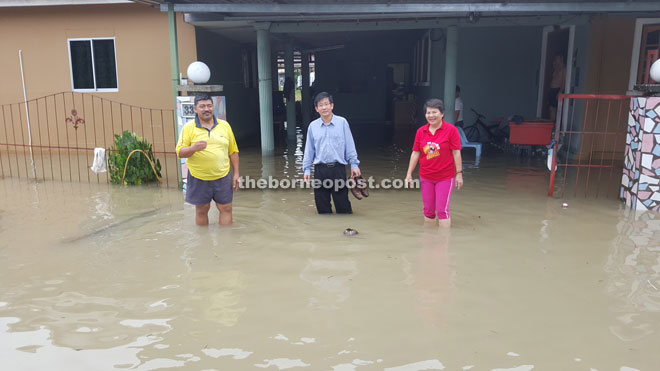 Tan (centre) visits one of the houses affected by the flash floods in Kuching.

KUCHING: The flash floods that hit many areas in this city yesterday could have been avoided, had steps to improve the drainage been implemented and enforced.

Stampin MP Julian Tan noted that that this had been the situation almost every year, with city folk worried about the occurrence of floods come the rainy season.

He said developments around existing residential areas had made the problem worse, in that the drainage slated to accommodate the projects had not been cleared or upgraded by the local council. This, coupled with poor maintenance and dirty drains, aggravated the problem even further, Tan added.

“The maintenance of the drainage is under the purview of the local council and it appears that they have been slacking in maintaining and also upgrading the system. The occurrence of the floods is directly linked to their inability to take the precautionary steps before it (flooding) happens,” he said in a statement yesterday.

Tan said he was saddened by the flash floods that hit the city yesterday, with Taman Desa Wira, Tabuan Dayak, Jalan Dogan and Jalan Pisang Barat the worst affected areas.

“The DAP has been constantly raising this issue in Parliament, stressing on the need to upgrade the old, existing drainage, build new drains and pipes, as well as implement flood mitigation projects.

“Based on the answers given by the Deputy Minister of Natural Resources and Environment in my question raised in Parliament on the research carried out in 2010, a total of RM584 million would be needed for Phase 2 of the storm flood mitigation programme, which would only be carried out between 2016-2017, depending on the country’s financial situation,” he said.

“So for the government to not prioritise the need of such project (enhancement of drainage), delaying it and also putting a condition for this development based on the country’s financial situation, shows that the people’s interest is not being addressed and taken care of.”

“This is for the public to decide on the mayor and members of the local authorities, based on who would serve them better.

“The people should have the right to vote for an efficient local council that prioritizes the interest of those under its jurisdiction,” he said.