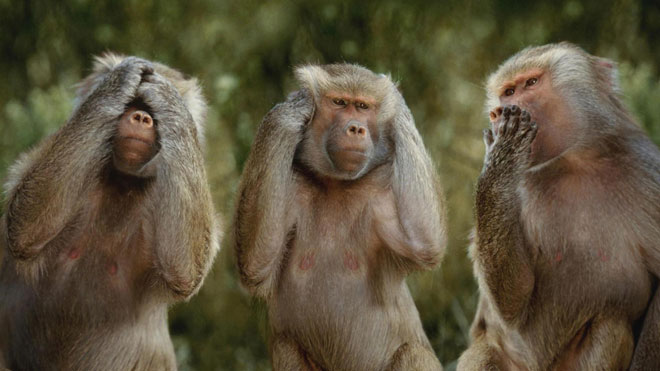 The Legend of the Three Wise Monkeys is a 400-year-old Japanese art originating from a 2,500-year-old Chinese code of conduct handed down by Confucius.

The legend is actually a 400-year-old Japanese art originating from a 2,500-year-old Chinese code of conduct handed down by Confucius.

Over the centuries, Confucius’s teaching seeped into Korea, Japan and other Asian nations.

In the 17th Century, the three monkeys were carved on a door of the famous Tôshô-gû shrine in Nikkô, Japan, to embody the proverbial principle of `See no evil, hear no evil, and speak no evil’—a teaching of Confucius.

The art piece was carved by Hidari Jingoro.

There are various meanings ascribed to the monkeys, but the proverb is generally a call to cultivate the mind to create a world of harmony, peace and goodwill.

Confucius’s philosophy probably came to Japan with a Tendai-Buddhist legend from China in the 8th Century (Nara Period).

The Kôshin rite of folk religion founded by Tendai Buddhist monk was influenced by the Chinese Taoism that includes the teachings of Confucius and ancient Shinto influences.

He was a social philosopher, teacher, editor, and politician of the Spring and Autumn Period.

He championed strong family loyalty, ancestor worship, respect of elders by their children and of husbands by their wives.

He also recommended family as a basis for ideal government and espoused the well-known principle ‘Do not do to others what you do not want others to do to you’.