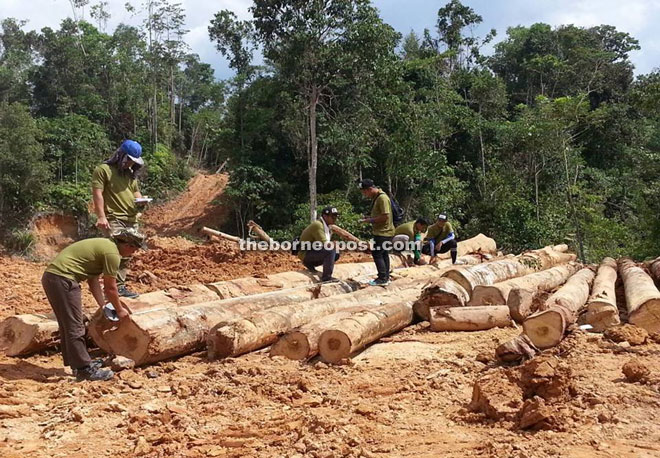 SFC officers check the logs before seizing them.

KUCHING: A team of enforcement officers from Sarawak Forestry Corporation (Bintulu) caught a suspect believed to be an illegal logger when they raided a site at Temabong Sg Kelabat, Pandan in Sebauh on Wednesday.

SFC in a statement yesterday said the team, who acted on a hunch that a forested area with a recently expired short-term timber licence could be a fertile ground for illegal loggers, also found 120 illegal logs of various species in addition to catching the culprit red-handed.

“The others fled upon our arrival at the scene.

“We also found an excavator and a crawler,” said a spokesperson.

The suspect’s statement has been recorded and a police report of the case has been filed.

Further investigation would be carried out by the state Forest Department.

Previous ArticleTherapist service in CRCs to be paid by govt
Next Article BCCK offers meeting, event service on cruise