Sunday, May 22
You are at:Home»News»Sarawak»Tree of Life exhibition launched 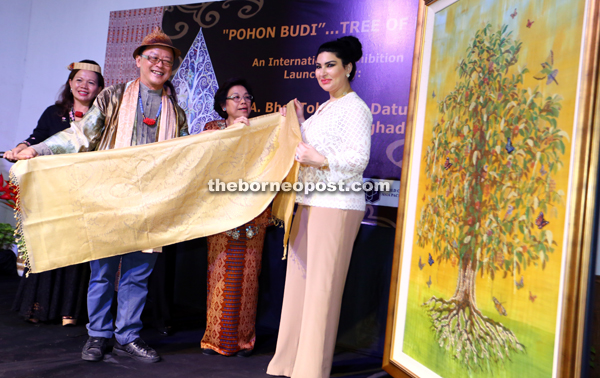 It is open to the public daily from 10am to 5pm until mid-February, showcasing over 100 pieces of artworks from 30 countries.

Among some of the artworks are textiles, embroidery, metalworks, ceramics, glass and others that feature the ‘Tree of Life’ concept of various cultures. They are mostly displayed at the Japanese Building next to the Old Courthouse complex, above where Little Lebanon Restaurant used to be.

According to Society Atelier Sarawak president Edric Ong, the Pohon Budi — Tree of Life exhibition is the second in the international travelling exhibition organised by the society, the first being the World Eco Fibre and Textile (Weft) Art exhibition.

“Weft Art started in Malaysia, toured two cities in Japan, four cities in India, was at the prestigious Brunei Gallery in London and at Nantong International Crafts Biennale, China.

“Similarly, it is the vision that ‘Pohon Budi – Tree of Life’ will also do the international circuit, starting with India this March and hopefully China next year,” he said at the launching ceremony.

Ong, who is also World Crafts Council Asia-Pacific senior vice-president, expressed hope that the state government will support them to bring local pua kumbu ikat weavers to showcase their art at the ‘World Ikat Textiles’ exhibition in London this April, as well as the Santa Fe International Folk Art Market in United States this July.

“Society Atelier Sarawak’s role in the international arts and crafts arena has brought awareness and promotion of the diverse beauty of Sarawakian arts, and the excellence of our products.

“Sarawak artists such as Bangie Embol, Mathew Ngau Jau, Ibu Ngot, Ramsay Ong, Michael Lim and Raphale Scott Abeng are living legends of their art, and it is encouraging to note the new generation of rising stars such as Tanoti Songkit, Catherine Senia Jugi and Nancy Ngali are already gaining recognition as young masters,” he said.

In addition to the opening of the exhibition, there was a forum on the Tree of Life yesterday afternoon. There were four speakers namely Dr June Ngo, Lah Jau Uyo, Christopher Choo and Ong himself. 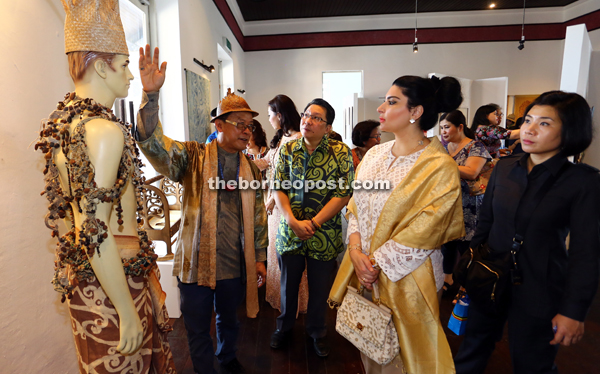 Ong briefs Raghad on one of the exhibits. 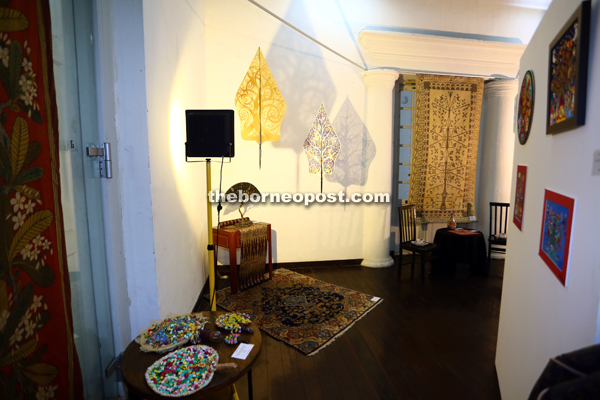 A section of the exhibition at the Old Courthouse.