Thursday, April 15
You are at:Home»News»Sarawak»Bujang Senang hunter to talk on ‘Crocs of Borneo’ 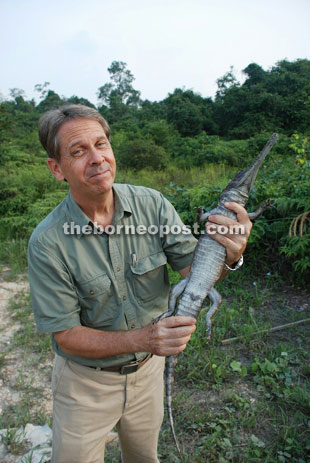 Rob Stuebing will be conducting a talk on ‘Crocs of Borneo’ at 56 Hotel on Feb 13. In 1982, he joined a Sarawak team to chase the legendary Bujang Senang of Sarawak.

KUCHING: The Sarawak Biodiversity Centre (SBC) will be holding a public talk on ‘Crocs of Borneo’ at 56 Hotel here on Feb 13 at 3.30pm.

The talk will be conducted by Rob Stuebing, who was part of a team that trailed the legendary Bujang Senang and other crocodiles in Borneo.

SBC in a statement yesterday said ‘Crocs of Borneo’ will focus on these toothy creatures as highly adapted dinosaurs as they share many features with their Archosaurian ancestors.

Stuebing will present how crocs are built, how they function, and some of the reasons that they behave the way they do.

The talk will also cover different species of crocodiles in Borneo, including one which has never attacked human beings, as well as crocodile management and human-crocodile conflicts.

Stuebing first arrived in Malaysia in 1973 and has lectured in vertebrate biology in three Malaysian universities since.

In 1982, he joined a Sarawak team to chase the legendary Bujang Senang.

As a member of the IUCN/SSC Crocodile Specialist Group, Stuebing continued to research crocodiles in Sabah until the early 1990s. After a year as Curator of Zoology at the Sabah State Museum, he joined the ITTO Unit of the Forest Department Sarawak to work in the Lanjak-Entimau Wildlife Sanctuary and the ITTO Model Forest Management Area.

Stuebing has also authored field guides with Dr Robert F. Inger on the frogs and snakes of Borneo.

Fans of SBC’s public awareness talks would be familiar with Stuebing who had previously given a colourful and fascinating presentation on ‘Snakes of Borneo’.

He now works with the RIMBA-Sarawak Project to build partnerships between local and international scientists for improving conservation management in several Totally Protected Areas in Sarawak.

Those interested in attending the talk are to send an email to [email protected] with their full names and contact numbers. There are no fees for the talk, with seats limited to early birds.