Friday, July 1
You are at:Home»Features»Breathing space for overcrowded Bau schools

AS the general population continues to grow throughout Bau District, the issue of overcrowding in secondary schools becomes more acute and warrants serious attention.

Overcrowding occurs when the number of students outstrips the intake capacity of a school. This may contribute to not only wear and tear of the school but also unsatisfactory academic performances since it is hardly possible for teachers to give students one-on-one attention in a jam-packed class.

Overcrowding in secondary schools has been a problem in Bau District for many years, and it is for this reason the SMK Singai is being built.

There are now only three secondary schools in Bau District with two — SMK Bau and SMK Lake — in Tasik Biru constituency, and the other — SMK Paku — in Serumbu constituency.

The schools in Tasik Biru have always been overcrowded, shutting out a number students in the constituency alone, not to mention the whole Bau District.

At least more five secondary schools are needed in Bau District of which three or four should be located in Tasik Biru to cater for students from 37 villages in Bratak, Singai, Jagoi and areas around Bau town. In fact, it is the rising student population in Tasik Biru that has prompted its elected representative Datuk Peter Nansian to lobby for SMK Singai, now under construction and expected ready in a year or so.

The project, approved under the first rolling plan of the 10th Malaysia Plan (10 MP), was launched by then Deputy Education Minister Datuk Dr Mohd Puad Zarkashi at the construction site in Kampung Opar on April 15, 2011.

Nansian, who is Assistant Minister of Community Development, believes the new school with boarding facilities for about 800 students, will mitigate — at least in the interim — the overcrowding problems SMK Bau and SMK Lake are presently facing and will continue to face in the next 10 years.  Although temporary, it is, nonetheless, a right step towards relieving the perennial headache of overcrowding. 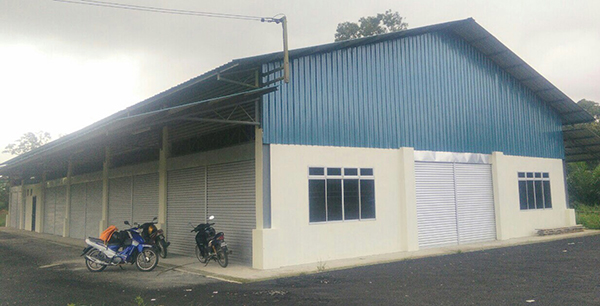 A community hall at Kampung Skibang.

Bau District Education Officer Les Met lauded Nansian’s perseverance in pushing for education reforms, both physically and academically, in Tasik Biru over the past 20 years.

“I can vouch for his conscientious lobbying to have more secondary schools built in Bau. Students in the District, like their urban counterparts, need a conducive learning environment. Because of his indefatigable efforts, the SMK Singai project got the nod — and is now under construction,” he said.

Les revealed the proposal to build SMK Jagoi and the rebuilding of SMK Lake had also been submitted to the government for approval, adding that Nansian had also requested for Kolej Vokasional to be built in Bau.

The project has been approved by Tan Sri Muhyiddin Yassin, the Deputy Prime Minister and Minister of Education, during Gawai Redeems in June, 2014.

The site has been identified, and implementation is slated under in the 11th Malaysia Plan (2016-2020).

He said Nansian, a former university lecturer, remained ‘very passionate’ about education development and progress not only in his constituency but also Bau District as a whole.

“He strongly believes a good education can give the rural people a better future.”

According to Les, principals, headmasters, teachers and education officers in Bau District have also been receiving strong morale and financial support from Nansian over the past 20 years.

As an encouragement to them, government grants had been given out annually to the Majlis Guru-Guru Besar and schools’ PIBG for their activities, he said.

“Nansian’s tremendous support for the education officers, the Majlis Guru Besar Daerah Bau and the Parents Teachers’ Association (PIBG), have motivated everyone to work together even harder, resulting in a marked improvement in exam results in Bau District for the last two years.

“We need a person like him to be our leader. He has the drive, networking and capability to help us bring more education facilities to Bau and get the government to approve the proposed SMK Jagoi as well as implement the Vocational College soonest.”

Tasik Biru is also undergoing reforms and transformation in the demesne of community development.

Bidayuh community Pemanca in Bau District Daniel Teho J Regaw said one of the major challenges posed by rural community development lay in the change of mindset — from subsidy mentality to receptive mentality.

“It’s a mentality of wanting to be involved in their own development and staying close to the government of the day so that they can benefit the most from whichever government policies to help them from time to time,” he explained.

Daniel said Nansian had been quite successful in doing that in his constituency, adding that the YB had also given equal attention to the disabled in his area.

“For social integration, equalization of opportunities and rehabilitation, Nansian had set up four community-based rehabilitation (CBR) venues in Tasik Biru, far exceeding many other state constituencies.”

Facilities like community halls and centres have also been made available to enable people to carry out their projects and programmes, socialise as well as foster fellowship to promote unity.

Community halls can be seen in every village while community centres are starting to appear in certain parts of Tasik Biru.

The Penghulu for Jagoi, Jihen Minaw, said the people in his area were happy with the performance of the present YB.

“The good thing about Nansian is he has been very fair in distributing government grants and projects to the villages, not just Jagoi area but also throughout his constituency, over the past 20 years.

“From my experience, Nansian has never disappointed us. Whatever we asked, he never said no,” Jihen stressed.

According to him, religious groups, village security and development committees, PIBG and CBR became almost the annual recipients of government grants through Nansian.

When talking about community development in Tasik Biru, REDEEMS is one of the success stories. Most members and associated members of REDEEMS will agree with its Central Executive Committee member Jessie James Maret that Nansian’s contributions towards the success of REDEEMS are undeniable.

“Personally, I admire his total dedication and hard work to conceptualise, strategise, plan, design and make REDEEMS Centre to what it is today. He makes things like these happen because he has multiple talents, knowledge and experience and the love to serve his people,” Jessie said.

REDEEMS has also started the Bidayuh Language Development Project and to date, there are three Bidayuh Play Pre-Schools in Tasik Biru.

To get the community to use bamboo not only for traditional use but also the modern bamboo industry and agro-forestry, the Bamboo Botanical Park has been set up near REDEEMS Centre. 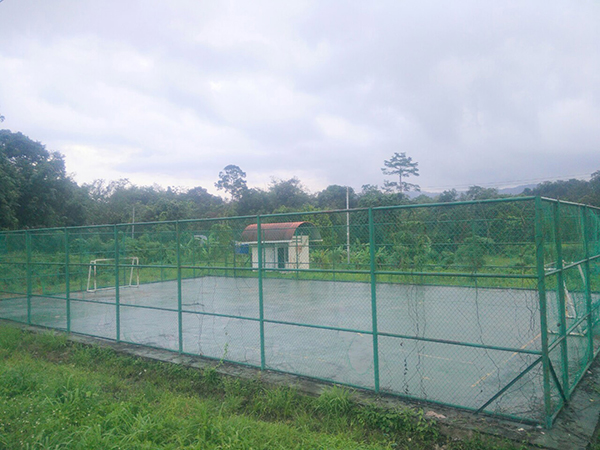 A futsal court at Kampung Skibang.

Furthermore, the Herb and Seed Bank projects have been developed in collaboration with the Department of Agriculture Research Section to enhance the quality, marketing and commercialisation of local fruits and herbs.

All these were Nansian’s initiatives and ideas, Jessie said.

Efforts are also being made to lessen land ownership disputes and entitle the rural people to Rumah Mesra Rakyat (RMR) in Tasik Biru.

To date, 17 out of 25 bumiputera villages in the constituency have had their kampung houses surveyed under the Kampung Lots Tradisi Survey.

Besides, more than 6,000 lots have been surveyed and over 60 units of RMR, worth over RM4, million approved.

Many areas in Tasik Biru have been perimeter-surveyed while some are now surveyed as individual lots so that titles can be progressively issued for NCR Land.

Kampung Skibang village headman Doros Nopek noted that the good thing about Nansian was that he always encouraged the villagers in his constituency to develop their community centres.

“He walks the talk by developing REDEEMS Centre and that inspired me to also start developing our Skibang Community Centre.

“With his full support and ready advice, we now have the Balai Raya and a futsal court, and very soon, a football field and public car park project will be implemented with his allocations for this year.

“He also helps us with some grants to build our new modern church which is expected ready soon,” Doros said.

Like other areas, Bratak has benefited from the community development agenda in Tasik Biru.

Bratak Penghulu Gani Jonek said Nansian was always ready to help any areas develop any sites with the potential to create economic activities for the local community.

He said in his area, Nansian was planning to develop Doro Orad or Mount Orad into a tourist spot. Described as a fortress for Bidayuh Bratak warrior Panglima Kurow, Mount Orad is located above Kampung Grogo.

“Nansian has engaged a qualified consultant to do a thorough on-site study and draw up a development master plan. Overall, he has done a lot for our community and Tasik Biru as a whole in terms physical, mental and spiritual development,” Gani said. 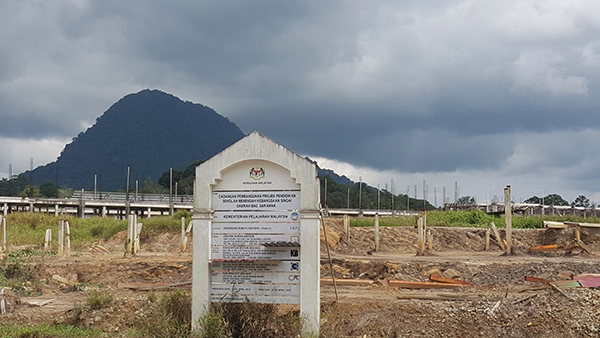 The construction site of SMK Singai.