Sunday, May 22
You are at:Home»Features»Sharing a unique heritage 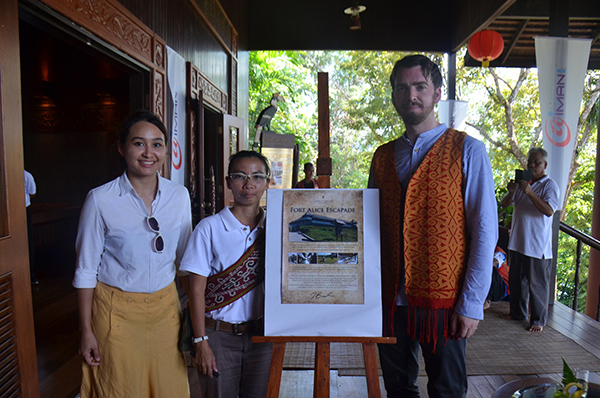 WHEN thinking of Sarawak’s romantic era, many would look to the time of the White Rajahs.

The Brookes have always been the subject of nostalgia, which is probably why the frequent visits to the state by the grandson of the last ruling Rajah Muda, Anthony Walter Dayrell Brooke, have invariably caught the attention of the local communities.

Jason Desmond Anthony Brooke’s two-week-long visit this time included an overnight stay at the Aiman Batang Ai Resort and Retreat on Jan 31 that quickly created a buzz among the local Iban community who formed a welcoming committee to receive him.

Brooke and his entourage, including Sarawak Tourism Federation (STF) advisor Lim Kian Hock, its executive secretary Willie Kueh and Borneo Adventure senior manager Emong Tinsang, were greeted at the resort by a traditional Iban dance before they were brought to witness another important cultural rite — the miring ceremony.

Brooke was also invited to sign the ‘Fort Alice Escapade’ brochure, featuring one of the resort’s new activities where guests can visit Fort Alice to learn more about Sarawak’s history. In the evening, thesundaypost had a chance to sit down with Brooke for an interview on his current updates, programmes and plans.

According to Brooke, his last visit to Sarawak was in early 2015 where he represented the Brooke Trust, a UK charity working to preserve and share Sarawak’s unique heritage and use it to inspire communities.

“My recent visits had focused on work for the Brooke Gallery at Fort Margherita. The permanent museum exhibit will display a collection of my family’s artefacts, sponsored by the Brooke Heritage Trust that tells the history of Sarawak for the first 100 years under the Brookes.

“The exhibit aims to share the important items and artefacts related to the history of Sarawak with Sarawakians and provide opportunities for them to engage with the items and learn more about their local cultures and heritage. The Gallery is scheduled to open in April or May this year,” he said.

He described the Brooke Gallery as an exciting project by his Trust, working together for a few years with the Sarawak Museum Department, saying: “Among the items to be showcased are digitised records from the Brooke era.” 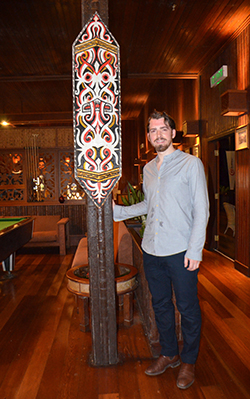 Brooke standing beside an Iban shield at the Resort.

The Brooke Heritage Trust is an organisation founded by Brooke together with his younger brother Laurence Nicholas Brooke and his father James Betram Lionel Brooke. It works to share and preserve the 175-year-old heritage left by their family.

Besides the gallery, the Trust has a number of other interesting projects in the pipeline, including a biopic titled ‘White Rajah’ which tells the story of James Brooke’s first 20 years in Sarawak.

The proposed feature film has captured the attention of many film enthusiasts, especially Sarawakians.

While the film is not produced by Brooke personally, ‘White Rajah’ has been supported by private investors in Malaysia as well as the Sarawak government. The Brooke Trust is a technical adviser to the producers, encouraging them to shoot the film in Sarawak and trying to make it as historically accurate as possible.

“It will be a swashbuckling US$16 million adventure film, the largest ever made in Sarawak,” Brooke said.

The location is yet to be confirmed but Brooke pointed out that he had spoken to the director to make Sarawak the filming destination due to historical authenticity and also having the right people such as the Dayaks to be part of the project.

The original choice for filming was Indonesia due to the availability of infrastructure.

“The filming timing is still uncertain — it could be late this year or May next year,” he said. 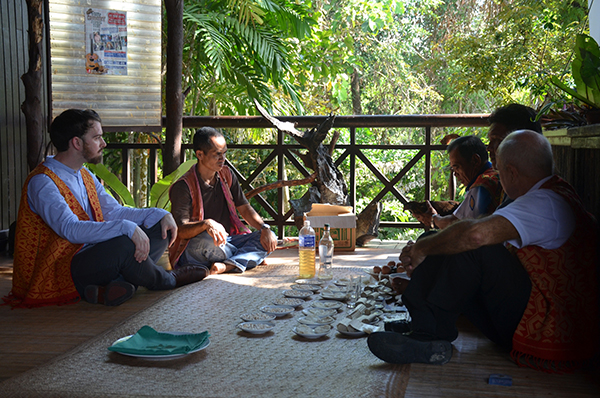 Brooke participating in the miring ritual.

On future projects under the Brooke Heritage Trust, Brooke said one would be to rebuild James Brooke’s ship — The Royalist.

“The Royalist project has completed its research, design and planning phases. We have selected our building location and are now looking at finalising our stakeholder groups before commencing with the build phase.

“In the long term, the ship will provide opportunities to recreate James Brooke’s voyage to Sarawak and for young people from different walks of life to work together onboard the ship. It will also serve as an important and visible ambassador for Sarawak around the world.

“We are actively seeking support for the project, in particular, corporate and institutional sponsorships. Once commissioned, the build phase will take 36 months.”

The Trust is also working together with the local communities in Siniawan and Kampung Pininjau Lama to rebuild James Brooke’s bungalow located on a hill at Bukit Serumbu.

“We’re trying to get the locals involved through activities like gotong-royong, clearing up the areas and bringing in the materials for rebuilding. Just like (Fort) Margherita, we want the local community on board to encourage them to keep the projects on historical sites alive,” Brooke said.

Apart from Fort Margherita and the bungalow, Bung Bratak also has close links with the Brooke family. Bung Bratak is a fascinating place and has a very rich history. In 1837, the Bidayuh inhabitants were attacked by the Skrang Ibans with most of them killed or carried away as slaves.

When James Brooke became Rajah in 1841, the surviving representative of the Bidayuh, Panglima Kulow, appealed to the Rajah to secure the release of his people from the Skrang.

Kulow travelled with the Rajah aboard The Royalist to Skrang and the Rajah secured the release of over 700 Bidayuhs and returned them to Bung Bratak.

“Today there are over 35,000 descendants of those rescued captives who warmly cherish their links with my family,” said Brooke, who managed to meet Datuk Peter Minos, chair of the Local Heritage Committee and head of the Heritage Centre for Bung Bratak.

He said the Brooke Fellowship Programme was inaugurated in honour of his grandfather.

“It has been established as a tribute to the life and work of Rajah Muda Anthony Brooke.

It will provide support to inspire people to look afresh at ways of building positive relationships within and between communities.”

Brooke, 30, has been visiting Sarawak two or three times every year. It started after he graduated from university at the age of 23 and wanted to reconnect with his roots.

“When I arrived here, I was warmly received, and the locals were more than willing to share information about Sarawak’s heritage with me,” he said, adding that after that, he was encouraged to set up the Brooke Heritage Trust.

Based in London, Brooke works with the British Museum where he is also working on projects with the Sarawak Museum.

“I’m staying in London, work with the British Museum but I will always have Sarawak in my life and heart,” he said.

He makes it a point to visit Sarawak at least twice a year and his next visit will be for the launching of the Brooke Gallery in April or May this year. 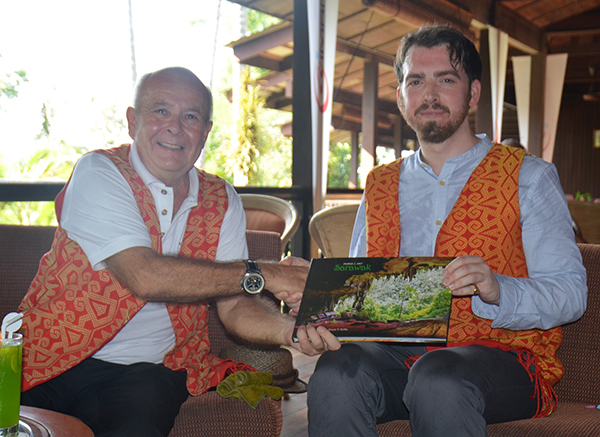 Aiman Batang Ai Resort and Retreat general manager Keith Pointer hands over a book on parks and arts in Sarawak to Brooke after the signing ceremony.

Previous ArticleAhoy! A Mirian on board the Queen Mary II
Next Article Lane 22 homes hit by Oya flooding since CNY eve