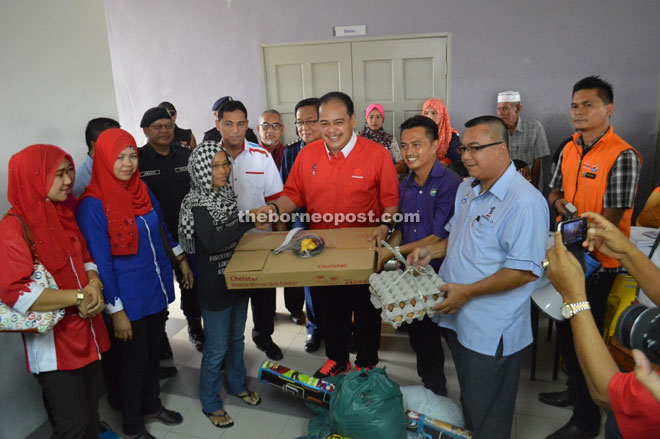 Samsudin (middle) presenting contribution to one of the fire victims.

SANDAKAN: Residents with houses located at the coastal area that were burned down in a fire have been advised not to rebuild them at the same area.

Sekong assemblyman Datuk Samsudin Yahya said the site where their houses were destroyed is not suitable to re-construct the houses due to safety reasons.

“Residents at squatter areas, especially those fire victims whose houses were razed by the recent fire, are advised not to rebuild their houses at the same area for safety purpose.

“The question on safety issue arises in squatter areas in this state, and residents are not allowed by ESSCom to build their house along the coastal areas to prevent any untoward incident,” he said during a visit to the fire site of Kampung Disayang, Lupak Meluas off Batu Sapi near here yesterday.

During the visit, Samsudin presented contributions to the fire victims from Sandakan Welfare Department and KRT Karamunting Lama.

On February 4, more than 100 families became homeless after a fire started from one of the wooden houses and spread to more than 70 nearby houses.

Meanwhile, Samsudin advised fire victims to be patient as efforts to determine whether they can occupy the People Housing Project (PPR) of Taman Batu Sapi located several metres from the fire site is being made.

“As PPR Taman Batu Sapi has been fully occupied, we are going to propose another 320 more units to be constructed for the fire victims of Kampung Disayang,” he said.