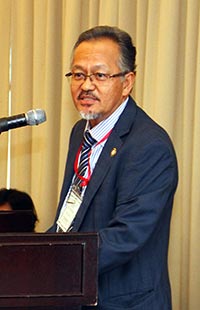 KUCHING: A total of 12 forest timber licences within the Heart of Borneo (HoB) areas are now progressing towards Forest Certification by 2017 as a result of a policy direction set by Chief Minister Datuk Patinggi Tan Sri Adenan Satem.

According to state Forestry director Sapuan Ahmad, the chief minister’s policy on sustainable forest management is to ensure forest areas in the state are sustainably managed based on international standard and recognised by global communities.

On biodiversity conservation, he said various scientific expeditions had been conducted which included scientific expeditions to Lanjak Entimau Wildlife Sanctuary in 2008, Batu Lawi in 2009, Paya Maga in 2010 and Ulu Mentawai in 2012. And last year, an expedition to Batang Balleh in collaboration with Sarawak Energy Bhd (SEB) and Universiti Malaysia Sarawak (Unimas) was held, he added.

“A more comprehensive database on the richness of Sarawak’s biodiversity within the HoB areas has been documented. A number of new species of flora and fauna were discovered which further enhanced the image and value of these HoB areas.

“An orang-utan strategic action plan has been drafted in collaboration with various state government agencies and the wildlife conservation society,” Sapuan said when officiating at
the Sarawak Heart of Borneo (HoB) Government Agencies Workshop at Century Hotel here yesterday.

He added that the Forestry Department had conducted specific focus research on salt lick ecology, Gunung Mulu Orchids project including wild cats project that specifically focused on Neofelis Diardii species, that was on-going.

The community-based or rural poverty eradication programme included restoration and rehabilitation of degraded forests at Ulu Merario, Bario, Batu Lawi and Ulu Limbang which had been completed. Other community projects were Gaharu planting at the Batang Ai area, Long Tuyo in Lawas and Ba Kelalan as well as machete making hut at Long Malim and Long Wat along with the provision of amenities for the Penan communities.

“There are numerous project ideas that are still yet to be realised and implemented. This is because there are other relevant state agencies apart from the Forest Department that administer and regulate activities within the HoB areas. This national and state mission needs support and cooperation from all relevant government agencies and together as a team, I am confident that we will effectively implement HoB activities for Sarawak,” he continued.

Meanwhile, the workshop aims at enhancing the government agencies collaboration and consultation within HoB areas in order to achieve sustainable land use and rural communities’ development agenda of the state.

The HoB initiative is towards enhancing conservation and sustainable development while minimising forest degradation, the associated loss of biodiversity and ecosystem services. Sapuan believes this will further serve to improve the welfare of those living in Borneo.

HoB covers an area of approximately 20 million hectares of contiguous tropical forests between Malaysia, Indonesia and Brunei. The country’s HoB areas total about six million ha of which Sarawak offers an area of two million ha. These areas are saddled in the state’s hinterland spread out from its northern region of Limbang and Miri divisions towards the central areas of Kapit and southern region of Sri Aman, Sibu and Sarikei divisions.