Sunday, May 22
You are at:Home»News»Sarawak»Bung Bratak Heritage Centre set for completion next year 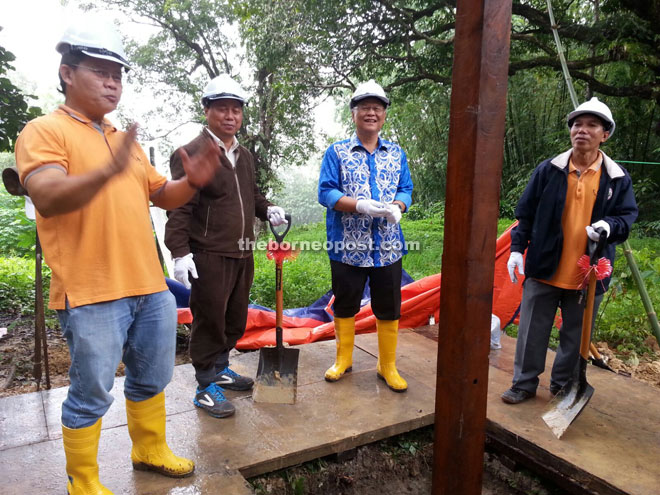 BAU: The building of Bung Bratak Heritage Centre atop Bung Bratak here is set for completion by middle of next year.

Chairman of Bung Bratak Heritage Association (BBHA) Dato Peter Minos said the centre would be a pride of the Bidayuh especially those of the Jagoi-Bratak group who calls Bung Bratak their ancestral home.

“The RM8 million-centre is funded by Ministry of Tourism and Culture and is being built by a Public Works Department-selected contractor.

“It will be a historical centre as well as a cultural and a mountain-top eco-tourism retreat,” he said after the installation of the first belian pole at the site yesterday.

Minos said the centre would consist of two traditional longhouses – one for accommodation and the other to house a conference room, office, mini museum and function rooms. There would also be a big traditional roundhouse (Baruk) as well as a kitchen and dining hall.

“The centre will make Bung Bratak a famous historical site to symbolise an era when one group from Sungkong (Kalimantan) came and settled there 750 years ago. The centre will also tell about Panglima Kulow who in 1841 rescued 300 Bung Bratak children captured by enemies.

“Kulow was assisted in late 1841 by Rajah James Brooke in the rescue mission. The 300 children were the direct ancestors of the present Jagoi-Bratak Bidayuhs of Bau and Lundu districts which comprises 33 villages and 30,000 people.

“Bung Bratak and Panglima Kulow are thus of great historical and sentimental value to the Bidayuhs of Jagoi-Bratak,” he said.

On behalf of the association, Minos thanked Mas Gading MP Anthony Nogeh Gumbek and Opar assemblyman Ranum Mina for agreeing to fund the projects through government grants and also the road to the centre, jungle tracks to two waterfalls on the hill and the parking lots on the foothill.