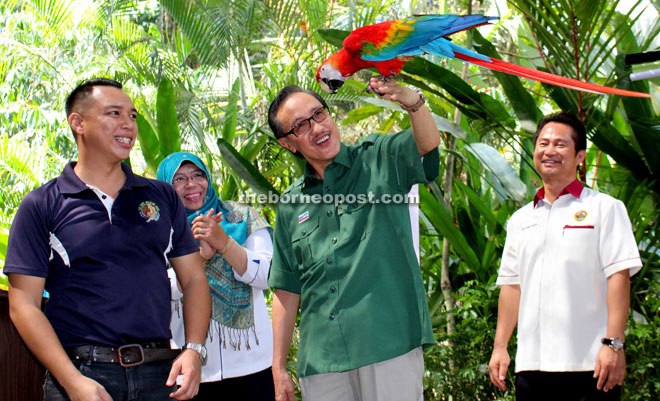 A trained parrot landing on Masidi’s hand during an opening gimmick in conjunction with the World Wildlife Day celebration held at the Lok Kawi Wildlife Park yesterday. 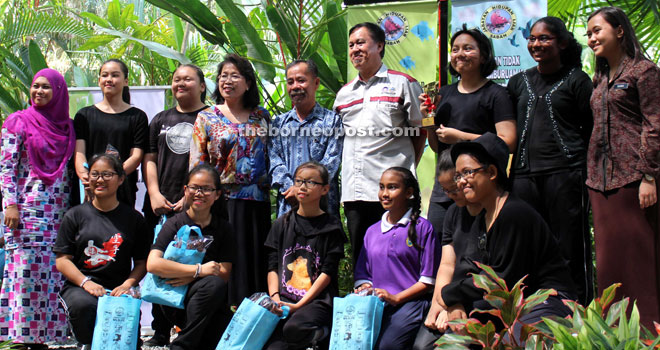 KOTA KINABALU: Faced with the pressing issue of rubbish washed ashore along the State coast, the Ministry of Tourism, Culture and Environment is set to introduce a ‘policy for drastic measures intended to rectify ocean and river pollution.’

Tourism, Culture and Environment Minister, Datuk Seri Panglima Masidi Manjun, said that the policy is one of the many initiatives aimed at downsizing the trash pile commonly found along the coastline.

He further said that the bid to issue the policy has been brought to the attention of the State Cabinet, where the papers are being prepared, and the policy will only be announced after the Cabinet has had an opportunity to look into it.

Once the Cabinet has decided on actualising the policy, it will first be enforced in Kota Kinabalu in its early stages, before being put into effect in other districts, said Masidi.

Furthermore, he said that the realisation of such a policy is of utmost importance, given the condition of our waste-filled waters.

Masidi even confided the woes of tourists and scuba divers alike, who expressed much concern regarding the matter.

“A lot of divers, and those who come here to snorkel, are shocked by the magnitude of pollution in our seas. They told me that if we don’t do anything about it, over time, tourists will simply stop coming over.

“They are bluntly honest in a very respectful way, but I think we have to accept that inevitability,” he told reporters after officiating the World Wildlife Day celebration at the Lok Kawi Wildlife Park yesterday.

When asked if introducing the policy will involve a law amendment, Masidi said that no decision has been made at this point in time, but if there is a need to amend the law, it would probably be done.

“Creating a law is not easy, but complying because there’s a law – I don’t think that’s good enough. We should comply with it not because it’s the law, but because we really believe that it is what needs to be done,” he added.

Touching on the involvement of other parties in the enforcement of the policy, Masidi said that the Ministry is undoubtedly trying to get hoteliers and stake holders to work together with the government.

In regards to funding, he emphasised that they are trying to convince the stake holders to look at the benefits of the policy rather than just the cost, as financial implications are inevitable.

“Drastic does not necessarily mean it’s going to be unpopular. But, unfortunately, I can tell you that what is good is not necessarily popular. That’s the rule at the end of the day,” said Masidi to a question about whether or not the Ministry is prepared to face any objections or backlash from the public.

Earlier in his speech during the officiating of yesterday’s event, Masidi said that the Ministry has been implored to act against pollution in our seas and rivers, after seeing marine life such as turtles fall victim to boat propellers and eating plastic bags.

He also announced that an allocation of RM2,000 will be granted to the schools that participated in the World Wildlife Day celebration, to allow them to carry out environmental projects of their choice.

“We just want to make sure that for whatever programme they choose to do, we are here to say, in our own little way, we want to help you do it,” he said, adding that students are the most effective medium to spread awareness and are the best people to educate on the matter.

Among the schools that showed their support and took part in the celebration were SM All Saints, SM Stella Maris, SM La Salle, SMK Limbanak, SMK Putatan, SMK Bandaraya and SMK Inanam.

At the end of the programme, SM Stella Maris emerged as champions of the Drama Competition whereas SM All Saints came out on top in the Wildlife Race.

A photography contest was also held in conjunction with the celebration, which was open to the public.