Friday, August 19
You are at:Home»News»Sarawak»Car slightly damaged by fire as Bomba close at hand 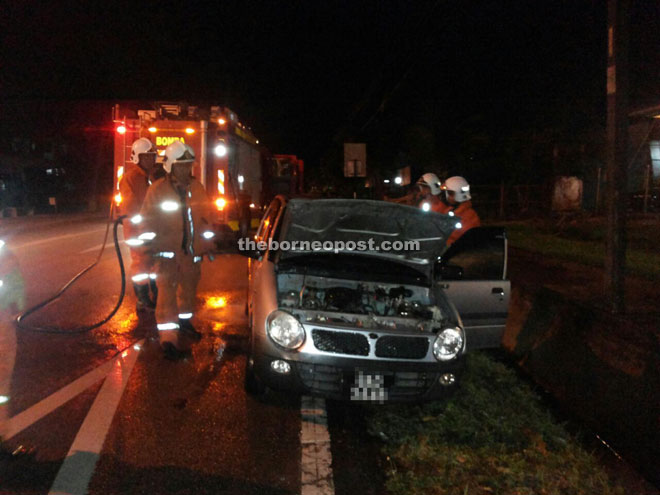 Firemen examine the car to ensure the fire had been completely put out.

SARIKEI: A Kancil car was slightly damaged after its engine caught fire near the junction of Repok/Bangunan Kerajaan Road here last Wednesday night.

The damage was minimal as the incident happened a few metres from the district Fire and Rescue Services (Bomba) Station here.

According to district Bomba chief Suna Kaha, they spotted the troubled car the moment they received a call at 7.47pm. Though the incident happened a short distance away, a team of seven firefighters was dispatched in a fire engine equipped to fight a fire.

Suna reported that the firemen reached the scene in a minute and extinguished the flames in three minutes, leaving the car only 10 per cent damaged.

The driver who was making his way to town from his house at Su Mee Road recalled that when he reached the junction at Jalan Bangunan Kerajaan, he smelt something burning and on seeing sparks under the steering wheel, he stopped the car by the roadside.

He opened the car’s hood and pulled the battery cable before leaving firemen to deal with the burning car.