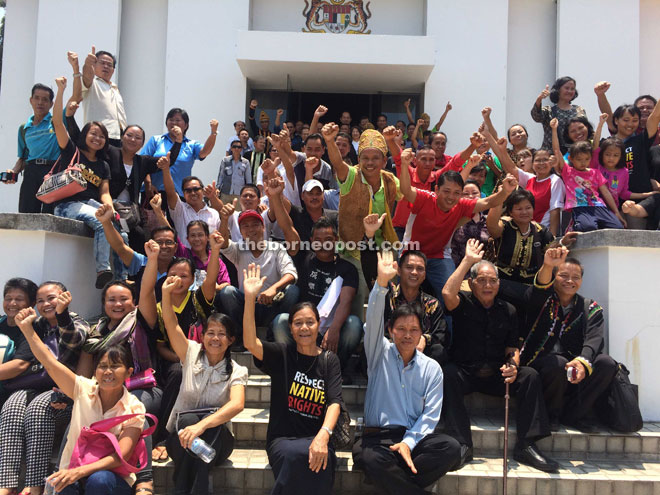 The villagers happy after the court proceedings yesterday.

KOTA KINABALU: A 15-year dispute between Native Customary Rights (NCR) holders in Tongod on one side and large corporations and the Sabah government on the other was settled amicably after a third mediation.

Justice Douglas Cristo Primus Sikayun of the Kota Kinabalu High Court yesterday issued a court order sealing the Settlement Agreement between the parties that was agreed upon early this month.

In a consent judgement, Douglas yesterday said both parties and each of them shall comply with the terms and conditions of the settlement agreement dated March 10.

In delivering the judgement in an open court proceeding, the judge reminded the plaintiffs not to sell or mortgage their lands given by the government as those were their only properties, and that nowadays it is very hard to find a piece of land.

“Develop your lands given by the government and please don’t quarrel, don’t disturb the companies and those who want to work with the companies, you can work with them as now they are your neighbours and together all of you do your responsibilities,” said Douglas.

The judge also said the case had been on-going for the past 14 years since 2002.

He said the case had taken a long time to be disposed of and was complicated as it involved seven villages where each of them had come up with their set of evidence. It involved seven distinct folklores, oral history, way of life, way of living and seven different ethnics.

“I had to bring my interpreter to translate for me and it was translated into Malay and English, which took a long time and so far, the notes of proceedings were more than 300,000 pages and only 16 witnesses had been called to testify,” explained the judge.

After the proceedings, the villagers and lawyers proceeded to a space next to the court house building to dance and celebrate their happiness.

On October 11, 2002, the five plaintiffs, who also represented the other villagers, had filed the suit against the eight defendants.

In 2003, the first, second and third defendants had appealed to strike out the plaintiffs’ claim on the grounds that the High Court had no jurisdiction to hear the claim under Order 18 Rules 19 of the Rules of the High Court.

At that time the appeal was heard by the deputy registrar of the High Court, who subsequently dismissed the three companies’ appeal and ruled that the High Court had the jurisdiction to hear the plaintiffs’ claim.

The three defendants then appealed to the judge in chambers against the decision meted out by the deputy registrar of the High Court. On March 21 this year their appeal was dismissed by the High Court here.

In the course of the proceedings, the villagers suffered setbacks after their claim was struck out by the High Court in 2008 and by the Court of Appeal in 2011 on the grounds that the High Court had no jurisdiction to hear the plaintiffs’ claim relating to NCR under the Sabah Land Ordinance.

However, this Darinsok case was revived in 2011 when the Federal Court allowed the plaintiffs’ appeal against the dismissal of action by the High Court and Court of Appeal.

After that, in early March, 2016, a third attempt of mediation conducted by Chief Justice of Sabah and Sarawak Tan Sri Richard Malanjum and High Court deputy registrar Melissa Chia was successfully concluded.

Meanwhile, outside the court, the committee chairman of the seven villages, Paulus Gahin, 49, expressed his gratitude to all parties and expressed hope that this decision would be a stepping stone for them to plan on how to improve their economy and lives.

One of the plaintiffs, Kayah, said he felt very happy with the decision, and added that what had been given to them would help them develop their standard of living.

Secretary General of Jaringan Orang Asal SeMalaysia (JOAS), Jannie Lasimbang, said: “Today is a significant victory for Orang Asal in Malaysia. This Settlement Agreement acknowledges by law, yet again, the Orang Asal’s right to their NCR,”

“Companies and governments should take note of this landmark case and respect NCR to land to avoid the long and costly court process.

“We applaud the dedication of the Tongod community for their strength and resilience throughout the case, as well as their lawyers, Datuk Kong Hong Ming and Mary Lee for following through this case for 15 long years on a pro bono basis,” she added.

The closure of this case however is bittersweet for those involved.

“It has been a very pitiful and depressing experience for the villagers to have their case last this long,” Kong shared.

“The justice system and operation is a serious disadvantage to poor people such as our villagers who are in no position financially or otherwise to go through and sustain the long and costly court process. Especially as they have to spend time away from their home and travel to the city for the trial, while having to also make ends meet at home.

“Fortunately they have very good, committed and determined leadership and a strong desire to have a better life in the future. I have learned much from this group of villagers who deserve a much better way of life. They have been deprived all these years,” he added.