Sunday, September 26
You are at:Home»World»China beefs up airport security after Brussels attack 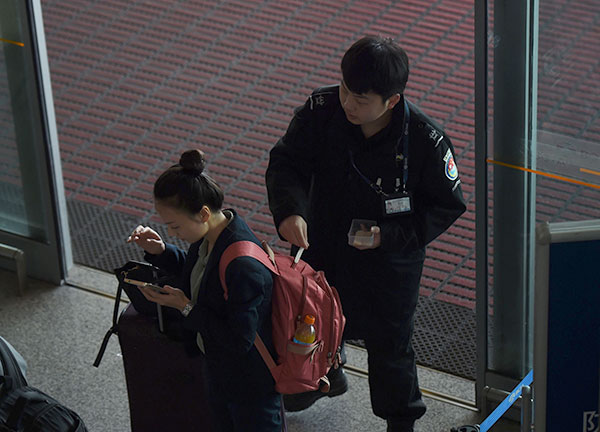 A security guard swipes a woman to check for explosives, at an entrance to the airport in Beijing. — AFP photo

BEIJING: China stepped up its airport security in response to the Brussels attacks, the aviation administration told AFP yesterday.

Surveillance is heavy and widespread in the People’s Republic, which has long had mandatory bag screenings and ID checks at train station entrances, although airport terminals have generally not been subject to such measures.

Security personnel at airports in Beijing, Shanghai and Chengdu swabbed some passengers’ bags outside terminals Friday, AFP reporters witnessed on the scene. The measures came days after suicide bombings killed 31 people at the airport and metro of Brussels, capital of Belgium and home to the headquarters of Nato and the European Union.

The Civil Aviation Administration of China (CAAC) said in an email that Beijing’s measures were intended to “inspect every passenger entering the airport”.

The measures were taken “because of terrorist incidents in Belgium,” it added.

At Beijing Capital Airport, three officers were stationed at a terminal entrance testing bags under a sign that said, “Security inspection for anti-explosive. Please cooperate.”

Not all passengers were swiped outside the terminals, and there were no additional pat-down or X-ray checks.

At Shanghai’s Hongqiao airport, one of the city’s two main airports, two employees in blue uniforms labelled “Explosive Detection” swabbed the bags of some, but not all, incoming passengers at the main entrance of the terminal.

The Brussels attacks, claimed by Islamic State, have raised security concerns in Europe and around the world after jihadist attacks killed hundreds in France and Turkey in recent months.

Violence has plagued China’s northwestern region of Xinjiang, the homeland of the mostly Muslim Uighur ethnic minority, in recent years, sometimes spreading beyond it.

Beijing blames the violence on separatist Islamist terrorists, with overseas connections, while rights groups point to what they say is discrimination and controls over the Uighurs’ culture and religion.

In March 2014, 31 people were knifed to death at a train station in Kunming, in southwestern China, and a month later assailants attacked the train station in Urumqi, Xinjiang’s capital, killing three. — AFP