Monday, November 29
You are at:Home»News»Sabah»Renewed call to ban shark finning 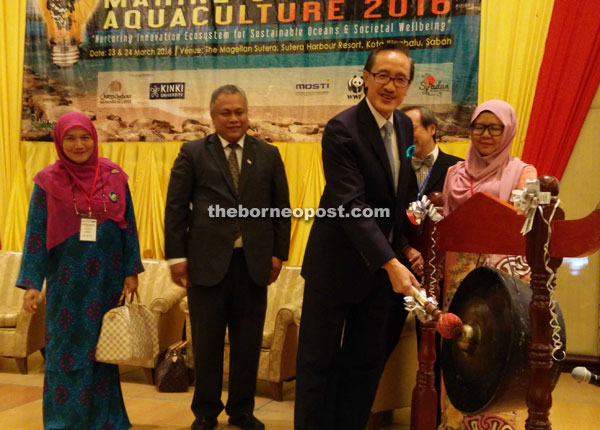 Masidi officiating at the ICOMSA 2016 hosted at the Magellan Sutera yesterday.

KOTA KINABALU: Sabah has renewed its call for federal authority to set in place new laws to enable effective banning of shark hunting and finning in the state.

“Over 55,000 divers came to Sabah and one of the top reasons why they came was to see the sharks in the wild. And yet, here we are, selling sharks and shark fins in the market,” he said when officiating at the International Conference on Marine Science and Aquaculture (ICOMSA) 2016 here, yesterday.

Masidi, who has been vocal on the issue for years, said was disappointed with the response from the federal government to Sabah’s request for federal laws prohibiting shark hunting and finning in Sabah waters to be introduced.

“I have been asking for this for years. Sometimes I get disappointed. The answer given to me is that there is no need for such law,” he said.

Calling for academicians, researchers and conservationists gathered at the conference to support Sabah’s call for the anti-shark hunting law, he said the diving industry generated RM322 million for Sabah last year.

He reiterated that sharks were worth much more alive than dead to Sabah, stressing that the sale of sharks and shark fins for the same period could have not come close to even 10 per cent of the amount generated from the diving sector alone.

“We need a decisive action to protect sharks, not just for profit but for the environment. I suggest that this conference adopt a resolution calling for the federal government to ban shark hunting and finning,” he said.

Masidi had previously announced that Sabah was set to declare three of its marine parks as shark sanctuaries by mid this year.

These marine parks are Tun Sakaran Marine Park in Semporna, Tunku Abdul Rahman Marine Park here and the proposed Tun Mustapha Marine Park in Kudat, which cover a combined area of some 2mil hectares and is home to about 80% of Sabah’s shark population.

He had also said the state had no choice but to use state laws to protect Sabah’s shark population as a request to the federal government to amend the Fisheries Act to protect marine the species was rejected.

“We only asked for shark hunting to be banned in Sabah, not in other states,” said Masidi, adding he was not afraid of being “politically incorrect” in the name of protecting the state’s natural heritage.

Last year, Agriculture and Agro-Based Industry Minister Datuk Seri Ahmad Shabery Cheek said  the Sabah government’s request for a ban on shark hunting and finning in the state was unnecessary.

He said shark hunting and the finning industry did not exist in Malaysia and sharks, unlike tuna, were only accidentally caught by fishermen.

Meanwhile, at the event, Masidi witnessed a signing of a memorandum of understanding between UMS and Sutera Harbour Resorts to pave the way for future collaborations in marine research and conservation efforts.

ICOMSA was born as “Annual Seminar on Marine Science and Aquaculture” when it was first hosted in UMS in 2003. It was re-branded to its current name in 2014.

The event provides a platform for exchanges of knowledge on marine ecosystem and development of aquatic food resources through sustainable fisheries and aquaculture.

The theme for ICOMSA 2016 is “Nurturing Innovation Ecosystems for Sustainable Oceans & Societal Wellbeing”.